My bikes are for transport! If I want some exercise, I’ll go for a run. At least, that was my point of view when things were still normal. If I commute by bike I spend some 1:45 hr on it each day. That's enough! But now with me working from home I don't touch it. And that had two effects: one was that my feet did all the weight-carrying associated with my exercise. I was starting to feel that! And the other one was that I lost that 'I've been on my bike enough lately' feeling. So one day I decided to go take my bike for a spin! And not my commuter road bike; I wanted to bike my running route, and a lot of that is on slate gravel. And road bikes are better on roads. Smooth roads, preferably! These thin tires are for speed, not gravel-negotiating. So I got my old black bike out of the garage and set off.

The first thing I noticed was that I enjoyed myself. The second was that biking isn't an awful lot faster than running! At least not when most of the way is uphill. I wouldn't have to bike all that far to get enough exercise for a day in. I biked my normal route, and then went on towards Ogwen Cottage. I had run that before, but never biked it. Some bits are a bit steep but it was doable! And it's a beautiful route. There were a few more people out on that road. 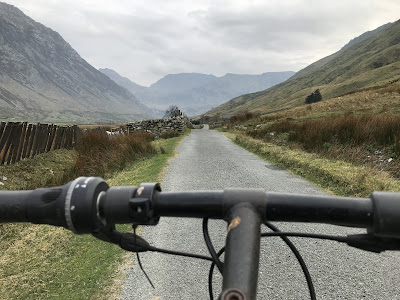 Empty road ahead of me! 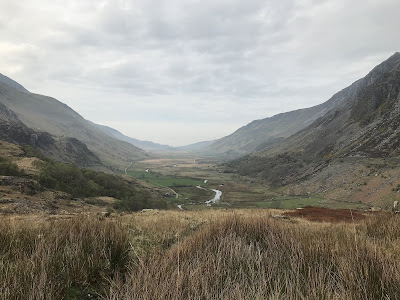 Compulsory view from the top of the valley

When I reached Ogwen Cottage I decided I hadn't been far enough yet. It had taken me some 45 minutes. And it's only 8.5 km! But that's what you get with steep bits. And some gates. And some stopping for pictures. But I was up for some more so I continued a bit along the A5. I stayed on the pavement. There was nobody else there!

I went to the far end of Llyn Ogwen and then turned around. It was weird to see no parked cars whatsoever even though it was a Sunday and the weather was nice! But that's lockdown for you. You are not allowed up the mountains, and not allowed to drive to a beauty spot. And clearly, people stuck with it! 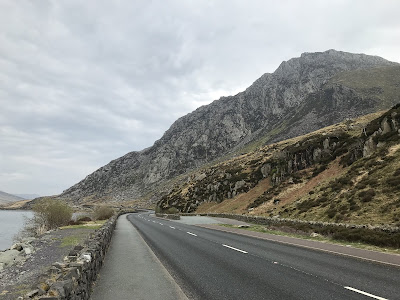 Tryfan, and the empty parking lots 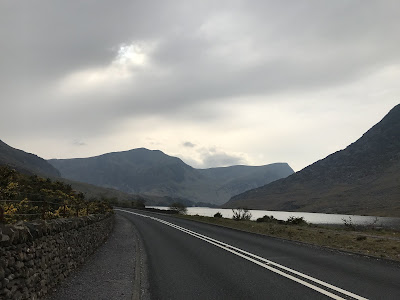 My view when I turned around

I turned around and biked back. This time I stayed on the road. I had it to myself! And then followed the old road again. I noticed some buildings I thought had featured in the film Gwen. Some of the farm outbuildings here have not been affected very much by this century. Or much of the previous one.

On the way back I was still glad I was on my black bike. The asphalt isn't perfect here, and if you do the downhill bits and you hit a rough bit on a road bike, you bounce like the clappers. This heavy, big-tired bike just absorbs such irregularities. 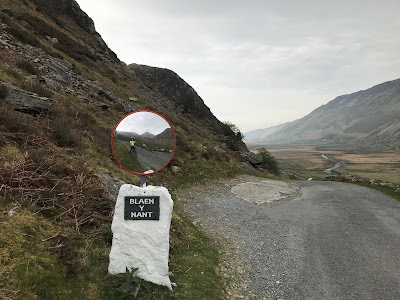 Again I couldn't resist the mirror on the road!

I got home satisfied. It had only been 21 km but that's OK for a day. I think I'll do this again! And I might even take my bike to Dinorwic one of these days. There is an asphalt road to the top of the quarry! And if I am ever to bike that, then now is the time!
Posted by Margot at 08:11