The technology I rely on

I'm glad I had got me a new phone only months ago! I had had some phone issues; after my iPhone 5 got old I accidentally got me a Samsung I never got along with, so I got back to the very old iPhone until I was up for renewal. So now I've been on an iPhone 7 since October. And that thing now works very hard for me! In addition to what it already was: a phone, and the sort of computer for which you don't have to be in your office, it's now also my access to Welsh class, Welsh practice, dinners and drinks with friends. Very important! I'm glad I have a model I get along with and that is not too old and behind the times. And I know deliveries are still allowed so anyone who can afford it can just go and buy a new phone but I'm glad I don't have to.

My computer is a different story. It's been in my service since 2013! And it's been doing its job without complaining ever since. I don't know what the average lifespan of a laptop is but I think this thing is doing well. And it's a touchscreen! I'm really happy with that. Much less risk of RSI if you can just manipulate the screen! I hope this trusty steed will see me through the entire lockdown. I think it will; it shows no sign of getting fed up with things! But it has an awful lot more than normal to do these days...

With Jenny we even used both at the same time. When we had our first Teams meeting, we used her iPad and my iPhone. That went well! The second time we used our computers. That didn't quite result in the same call quality. So we hung up and went back to our Apple devices. That went fine again! But then she decided to send me a document with a grammatical exercise. And I did it there and then! But that meant keeping the conversation going on my phone while reading the document on my computer screen. Serious multitasking that!

I'm also increasing my software skills; I hadn't used Skype in years but I'm back on it. I now use Teams all the time. My Whatsapp gets more to do. And I imagine I will soon have to try Zoom. Hello, 21st century! 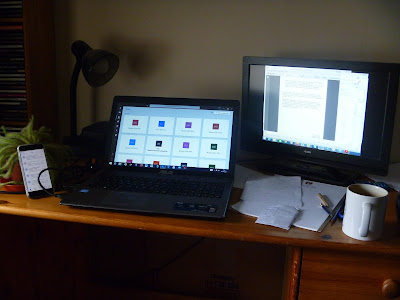