When I have my dinner parties with Jaco and Marjan, I always sit in the garden. The weather has been great! And Skype is perfectly happy there. But I have tried other media too; FaceTime, Messenger video, Whatsapp video, Teams... and these don't tend to like the garden. They seem to struggle with the 4G there! And are happier with my wifi. But the wifi only covers the old part of the house. None in the bedroom or conservatory! So I had my last dinner party with Kate and Fiona in my kitchen. The software worked fine the second time around (not so much the first time around), but I had to stay in the old part of the house. And that meant the kitchen, as there I have a dining table. Dinner on a coffee table doesn't really work! Especially not online. So the dinner table is nice, but the view is not. I like to at least see the garden over dinner when it's spring. And I can see it from the bedroom (where my breakfast bar lives) and the conservatory. So I figured I had better get wifi there too! So I googled what a good but affordable wifi booster would be. And ordered it. And decided it could take a while, given how busy delivery drivers are. But it arrived in no time!

Then I had to set it up. The technical aspects were easy. But where to put it? Too close to the router and it would not reach the bedroom. Too far away and it would not work. I tried it in the landing. That was too far from the bedroom. Then in the only socket in, what to call it, the vestibule? But that was too far away from the router. Hmm. This was a precision job. I decided I had best try it in the corner of said vestibule closest to the router. But that required an extension lead! But if that's what it takes, that's what I'll use. So I dug one out, installed the extender, and checked how it worked. And it did! Lovely wifi in bedroom and conservatory. I have not yet tried how far into the garden it reaches. But I'm chuffed! I should now be able to do all my video calling from at least the entire house! 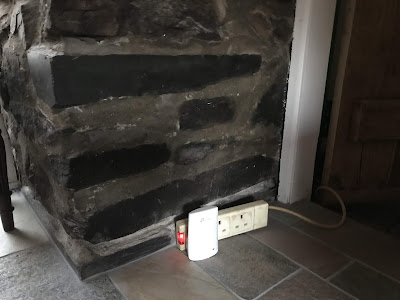 Not pretty, but effective; the wifi extender