When I moved in I decided to use some of my garden for growing food! So I bought some seeds and sowed them in one of my raised beds. But I'm not much of a gardener and that raised beds yielded buckets of weeds and maybe I had done it wrong and anyway, not much came of my attempt. Some plants won't have come up, and others might have remained unrecognised. Either way, it didn't work! I had one small carrot as harvest. But there was so much to do back then. And the house now barely needs work. And the garden has had a lot of work done too! So I think I can dedicate more time to it now. And as I am working from home, I will be around to keep an eye on the plants a lot more. So I gave it another go!

The previous owner had left a propagator box. And several bags of compost. And I had seeds left over from last time. So I brought it all together one Saturday afternoon! And I ordered some more seeds online. And now let's hope this will work. As the seeds are in soil straight from the bag I don't think anything that's not the intended plants will come up. So I can look after them, and when they are older I can first put them in pots and then later put them in the raised bed! And then hope they're strong enough to survive. Let's hope this time things turn out better! 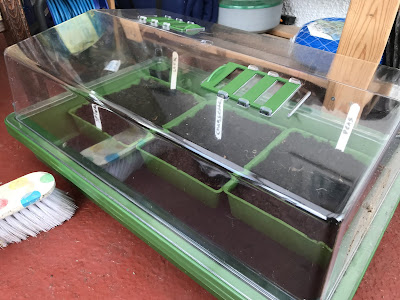