It has been gorgeous weather for pretty much all of lockdown. It is a bit of a pity to spend all that time in my chilly office when it's so sunny outside! And there was a lull in the amount of work. I had finished the first round of marking, but the second wasn't far. There would be three big deadlines coming in at the same time, and then another big one in the same week. So that would be it for a while then, regarding escaping from the office! ! Of course there was still enough to do: we had to be able to do an entire semester online. Will we have to? Maybe not! But if we only start preparing would it become clear we'd have too, that would be too late. But if you never go out and have some fun until you have no work at all to do you never will! So I got bold and decided to take a day off.

I wanted to go for a long walk. I had picked a target: Llwytmor Bach. I hadn't been yet! An excellent reason to go now. And I contacted Chris. Would he be interested in joining? It would be quite something, having to walk in from Bangor! My feet wouldn't enjoy that. But he has different feet. And he was up for it. So we decided to meet at Bwlch-ym-Mhwll-le. I was early! And a bit sleepy. I positioned myself strategically and lay down for a snooze.

When it was the actual time I was surprised I still had not seen Chris. He's punctual! I stood up. And then I saw him! Looking elsewhere. I hadn't been that strategically placed after all! He'd been standing there for ten minutes. But now we could start. We had a long way to go.

We walked to y Gyrn, up y Drosgl, to Bera Bach, and there turned towards Bera Mawr. It was lovely walking weather! We also bumped into a dog walker who seemed to be quite glad he could exchange a bit of small talk. It was all very pleasant! And over coffee we decided how exactly we would go on. We had a plan! But first we would have our coffee. And then visit Bera Mawr. That one I hadn't done yet either!

We had some fun on the top of Bera Mawr. But when we came back I saw Chris limp. So I questioned if we should push on to Llwytmor Bach. Or Llwytmore Mawr, for that matter! I figured we should not. I didn't want him to end up home in agony! I have walked myself into agony way too often myself. It's not fun. So we decided on a plan B. We would walk down the hill to the path that would loop around the mountain and get us back to y Gyrn. We had seen it from Moel Wnion and I had found it rather tempting-looking. So that way I could tick both Bera Mawr and that path off the list. Not bad!

We drank the rest of the coffee not far below Bera Mawr. And had lunch shortly before we were back on the plain. And one more drink where we had met that morning. And then it was time to say goodbye! The walk had been shorter than planned. but nice anyway, and Chris had a long way home still. And I still had some feet left so I could still do some work in and around  the garden. Which I did!

Later it would become clear this would be our last walk together until further notice, due to tightened restrictions. I'm glad I took that day off! I got that walk done while I still could! 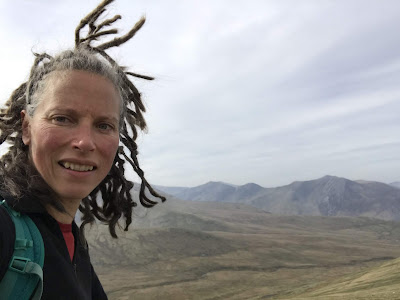 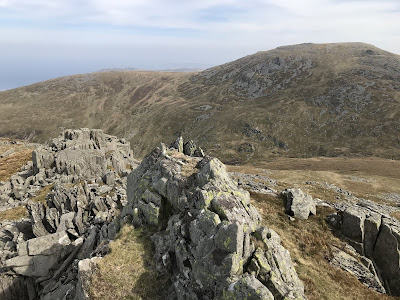 Llwytmor Mawr and Bach as seen from Bera Mawr 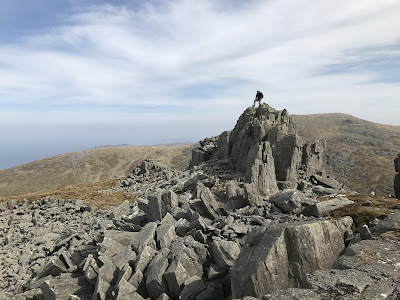