Soon after the Coronacrisis started, someone thought it might be a good idea to hang rainbows in our windows for people to look at and be cheered up by. I thought it was a lovely idea! But then, in order to join in, I needed the hardware. I know I have colouring pencils! But where? I looked in my cupboard and they were not there. Hm! Where had they gone? I pondered and pondered and all the while my windows were rainbow-free. And then, after two weeks, I had a brainwave and found them in my other cupboard. Hurray! Following the slogan 'better late than never' I set out unleashing my artistic talent. And hung the result in the window.

In other countries, it was mainly teddybears that appeared in windows. My sister, who pointed out a bear in a Helsinki window, commented on that rainbows tend to have different connotations! And yes they do. But is that a bad thing? Certainly not. But I figured one might as well go with both trends. The bears are spreading in the UK too. And well, as I live in a dead-end street with only four houses in it, and only one of those houses is beyond mine, I don't think my efforts will be noticed by many. But they surely don't do any harm either! 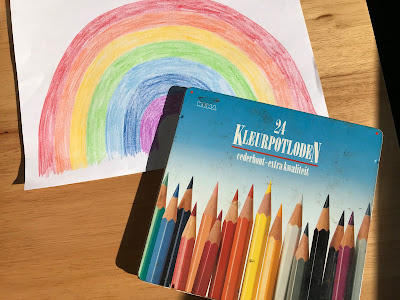 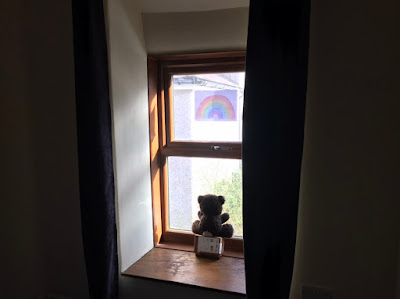