I had bought three kilos of pizza flour. And my reason for doing that was baking bread. But it would be rude to not make at least one pizza, wouldn’t it? So I gave it a go! My bread machine comes with a pizza dough recipe and I went with it. I added garlic though; I figured that would be nice! And it worked; in not much time I had a nice blob of dough. And half of that was a pizza base that night. The other half will have to wait a bit.

I plonked on the pizza what I happened to have lying around: mushrooms, aubergine, olives, artichoke hearts, and goat's cheese. A fine pizza if you ask me! And I had made it for my weekly dinner party with Jaco and Marjan. By the time it came out of the oven I had to quickly lug it to the garden to be on time for the video call, so I don't have a picture of the finished product, but I thought it was lovely! And it fed me two days. Look forward to using that second blob... 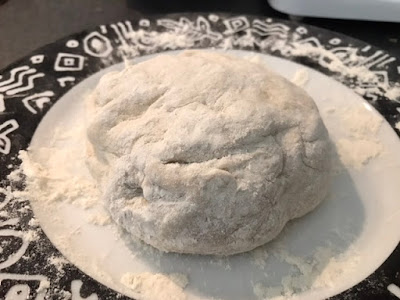 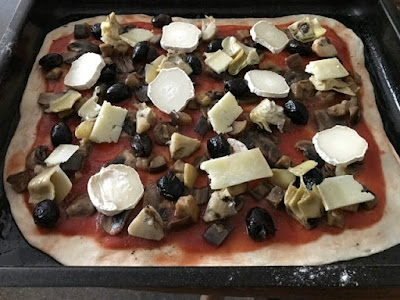 And the pre-oven product!
Posted by Margot at 07:38