Ever since I realised there was an asphalt road to the top of Dinorwic, I had wanted to bike it. But you know how that goes: life gets in the way! But when driving places to go for a run, walk or bike ride became outlawed, it suddenly became a much more attractive option. So one fine day I decided to go for it.

I biked out of town. Soon I was on the devilishly steep road to Mynydd Llandygai! I'd only biked it once. This time I had less luggage. I had started with three layers on but soon that got reduced to two. And after the steep bit it's a fair stretch you don't have to do in smallest gear. Nice and relaxed! But I was keeping a pace up as I was here for my exercise.

When I got to the actual access road to the reservoir things got serious again. Another layer came off! And I struggled my way up to the junction where the road to Dinorwic (rather than to the reservoir) starts. It's steep! I was sweating like a daft person. And it had taken me 45 mins to get there.

The rest of the way was not anywhere as steep as that access road. And the road is a bit dull but it has its own beauty! And I saw one cyclist coming down, with a big smile on her face.

After exactly an hour I was at the quarry. You can go in there! But I didn't; I was heading for the top. Eight minutes later I got there. I stopped, took a few pics, and got on the bike again. Strangely enough, the way back was a lot quicker! And soon both layers of clothing were back. This had been fun! And it turned out I was just in time; soon after, biking more than a 'reasonable walking distance' got banned. And this is 24 km and 600m ascent! Not sure that counts as reasonable... 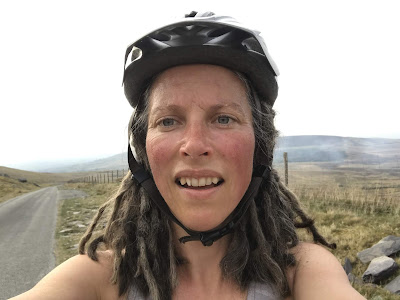 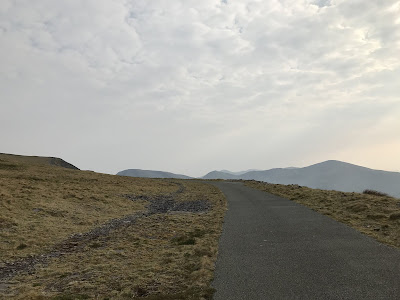 The Snowdon Range comes into view 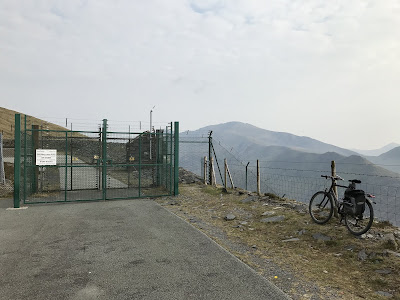 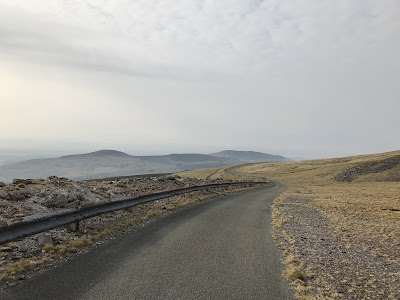 Moel y Ci in the distance