Britain has a flour problem! I haven’t seen any in a shop for weeks. And I’m not the only one. Shops that sell it are like hen’s teeth these days! And people have turned to ordering online in such throngs you can’t get any there either anymore. Also already for weeks!

The situation seems to be due to most flour, by far, is bought by commercial consumers like bakers and restaurants and such. And the bakers might still be going but the restaurants are not. And the entire country seems to have taken up home baking. And that depleted the supermarket stocks. And the grinding mills are not organised to package in small bags. So they only sell by the 16kg bag, and don’t have the transport capacity to send every bag to a different address. And all delivery companies are at full capacity. So there is flour but not in the right place!

This awkward distribution of flour happens locally too. There is a nearby pizza place which is now closed. And pizzerias have flour! And now they couldn’t sell it in their pizza bases. So they asked on The village Facebook site if people would be interested in buying it. And the response was ‘yes’! And it seems the go-to place for as hoc selling seems to be the parking lot next to my house (a local fisherman uses it too!), so that’s where they decided to go. And I decided to go too! The flour seemed to work for bread.

When I showed up there were some people milling around already. I joined them! And soon a van appeared. That seemed to be the one. So we formed a queue and the flour selling commenced. 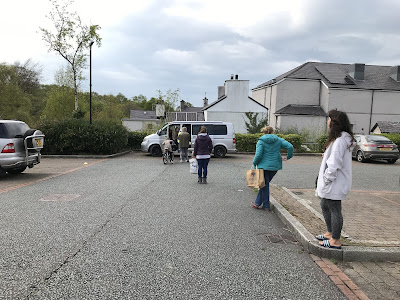 
I was just going to buy a kilo! I mainly use wholemeal. And they had asked for precise payment. I only had coins for one kilo! Soon it was my turn, and off I was with my kilo, in a recycled flour bag. Then I went for a run. The queue was quite long when I came past!

When I came back I saw they were still there, but without a queue. I checked my phone; they said they still had more and would linger a few minutes more. I decided to go back for two more kilos! By now they had all the change in the world. And maybe I should make a quiche! And pizza. And banana bread. I figured they wanted to be rid of it.

I have already googled a recipe for bread machine made pizza dough. I think I should try this! And quiche dough. I am getting inventive in the kitchen! As many people, I think...
Posted by Margot at 08:33