I like telling people I bought my black bike about 15 years ago, for about £15 (contemporary exchange rates). It was already dented and worn and might have been quite old back then. By now it's ancient! And it's also changed a lot in the meantime. I changed the tires, saddle, chain, cogs... and brake pads and -wires more often than I like remembering. It lost a horn and it gained double pannier racks and mud guards, and a stand. I tend to think it's the only one of its kind left. Who else keeps such an old heavy bike going for so long?

And then I walked past an university bike rack. Where just that very same model was parked! Also black! I got all excited. And took a picture. There's someone else out there with this bike! And they clearly take better care of it than I do! This bike looks fabulous! And that without mud guards... if I ever meet the owner I might have to be ready for some telling off! 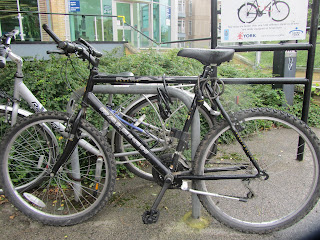 What my bike must have looked like, in the distant past!

And only a few days later I sought a place to park my bike. And found a space next to another bike - yet another black Raleigh of that very kind! With the thick oblique beam! This one looked a lot more knackered than the one above. A bit more like mine, in other words! But this one was considerable smaller. Three bikes of the same model, regularly parked within a few tens of metres of each other. We can start a black Raleigh society! 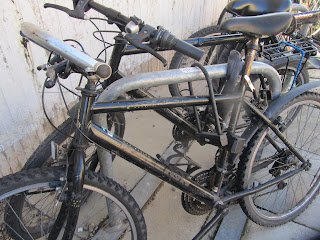 My bike (in the back) parked next to its little brother!
Posted by Margot at 09:40