I saw a film about a Victorian Welsh girl would play in Neuadd Ogwen. That sounded cool! It was called 'Gwen' and I quickly looked up the trailer. Yay, a film with mist and slate and moorland and an encroaching quarry! And it looked like the story was a bit too strong for me; I think daily life is exciting enough. No need to spice it up with, say, murder and helicopters and aliens and car chases and whatnot to make a movie out of it. Not that you have helicopters and aliens and car chases in your average Victorian film but you get my gist. But I could just look at the scenery! So I bought a ticket. And I went. 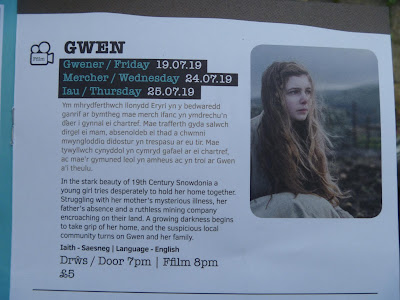 So what was it like? It looked great! I had no idea where the farm which was the main location was (some light googling afterwards suggests it was in Rhosgadfan, near where I had been walking with Jeff), but the neighbours were clearly the farm at the top of Nant Ffrancon. That only works in films. And there was a nice rock which was clearly in Nant Peris somewhere. And between the farm and the chapel (on the Vaynol estate, apparently) was Dinorwic Quarry. Why not! And the quarry offices were rightly in the Slate Museum.

Another thing I wondered about was that the Welsh don't stand together in the film. I have the strong impression there was a solid community spirit! And if you broke that and pandered to the demands of the quarry owners, by for instance breaking strike, you were pretty much seen as subhuman. The big strike ended in 1903 but sentiments still run high on this topic. So I don't think the level of collaboration with the quarry owner is realistic.

And I know it would be a pain to get it all right in a film, but in this one the mine owner goes to chapel with the local population. I don't think so! These mine owners wouldn't have spoken Welsh so why go to a Welsh language chapel. And they were generally Anglican so they would have gone to church. Oh well. I assume there were a lot more things historically inaccurate but it wasn't a historical documentary.

The film is playing three nights in Neuadd Ogwen! Very unusual. Normally they have only one screening of any film. And they even had it on the day it came out nationally. I suppose that as soon as there is a film about a big slate quarry with a bastard of an owner then Bethesda can't contain itself. I suppose it's a big hit in Llanberis too!