I had intended to go into the hills over Easter. With my tent! Just take a bit more time than normal to enjoy the surroundings. But then lockdown happened! Could I still do this? Well, we had been encouraged to use our common sense. So let's think. What are we not allowed to do? Travel. What are we allowed to do? Take our exercise. And what is the rationale? Well, if you travel you might be bringing the virus to where it hadn't been before. Say you go to your second house; if you have one, you are likely to be urban, and the cities are heavier hit than the countryside. So go to your second home and you may be touching things everybody else touches too. Doorknobs, touch screens, that sort of thing. Bad idea! But I can go for a walk in the hills. So could I spend the night? I pondered it and decided yes. Given that I can go on two mountain walks in two consecutive days, and that I will be only touching stiles and gates and such on the outskirts of town, it's actually better if I spend the night. Then I only once leave town and get back into it. And in between? I may touch some grass and some rocks but who else would touch them? Pretty much nobody. It's so quiet in the Carneddau! So I decided it give it a go.

I thought I would go on Sunday, but the forecast gave strong winds, so I decided to postpone. A good choice! It was even blowing a hoolie in Bethesda. Just imagine the Carneddau. And the Monday would be still a tad windy but the Tuesday would be still. So I packed my bag and set off in the middle of the afternoon. I headed in the direction of Ffynnon Caseg, the lake at the top of Cwm Caseg. I had been going in that general direction many times! The last time I was in that valley was the week before, when I had walked back from the zigzag. But I had never followed it all the way to the top.

I walked out of town. With my little bottle of hand sanitiser ready for the gates and stiles! And soon I was out of reach of such obstacles, and of other people. I made good progress. I expected to sweat a lot, and need lots of sunscreen, but the wind was too cold for that! I was soon walking in long sleeves. And the sun was on its way to the horizon. 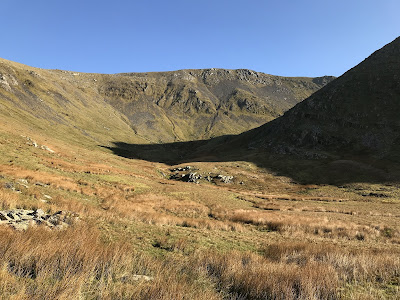 Getting into the valley which already has long shadows

After almost 2.5 hours I got to the river coming out of Cwm Bychan. I saw a potential camping spot I had actually seen before; when I had come by here with Chris on a January walk I had already pointed it out. And I was hungry! And it looked sheltered. And it looked like to would just catch the setting sun. I decided to go no further! Not for now, anyway. So I threw off my bag, bathed in the idyllic pool underneath the waterfall I was pitched right next to, and got my dinner stuff out. 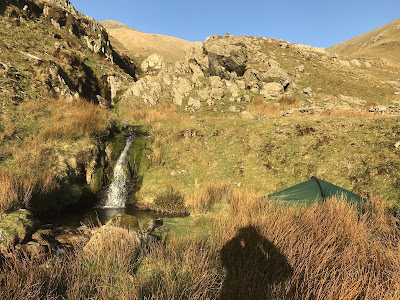 Made me a home for the night!

I had a nice quick dinner! I had just brought a tupperweared leftover. Not proper hiking food but for one night it will do! And I pitched the tent. And then I decided to go have a look at that elusive lake. I ignored some suspicious looks from nearby horses and walked up. And soon I was at the lake! Chris had recommended it for bivvying and I could see why. It was beautiful there! And lots of even ground. And, of course, the lake. But it was a lot darker than my spot!

Chris had also mentioned a level there. I soon saw it! It was too wet to go in (it was going to be a cold night and I didn't want to get wet feet now) but I had brought my strong torch. It seemed to be able to light up the entire level! I didn't expect it to be big; it had very little spoil. But now I know. 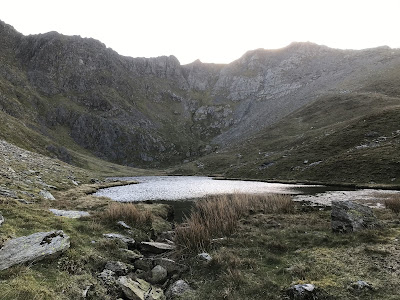 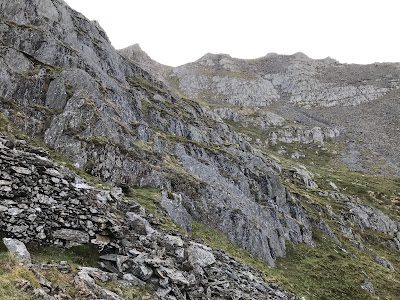 The cliff at the head of the cwm. Notice the man-made structure on the left 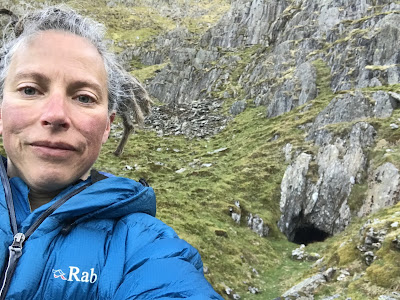 Hole in the ground!

I pottered around a bit and then went back. It was lovely! And I was back in time to see the sun go down. And then I read a bit, and drank some more tea. And then went to bed! I hadn't brought my superwarm sleeping bag as it was April. But that way I did end up with cold feet! (Imagine how much worse it would have been with wet feet and shoes!) The rest of me was warm enough though. And that will do. 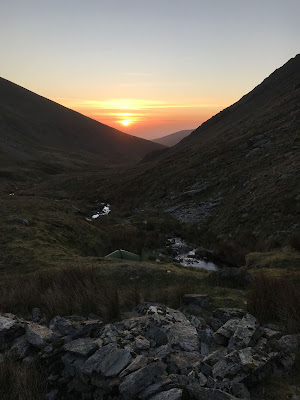 Sun setting over my camping spot

I woke up at five as I needed the loo. I knew I wouldn't get an awful lot of sleep after that as soon it would be light! And that came true. But the sun wouldn't shine into the valley until a fair bit later than sunrise so that was nice.

I got out of bed and made breakfast. Very nice! And I filled my flask. And packed my stuff. Time to go! But where? As my feet weren't feeling too well I thought I'd get the quickest way home. But after only a few minutes my feet felt better and decided to turn back and take the long way home. I went up the ridge just south of Cwm Bychan and went up the Carneddau horseshoe. Most of the climb was in the shade but once on the ridge I was in the sun and it would stay that way until the end! But once on the ridge, where to go? Straight home? It was tempting to go sit on Carnedd Llewelyn (which is in the opposite direction, but not far) for a bit. So I did! I had it entirely for myself, in a sunny still bank holiday weekend. It was magic! It was so silent. 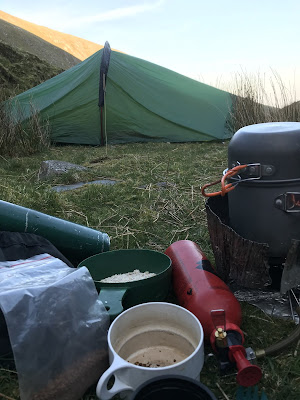 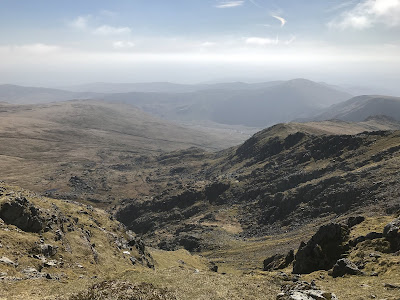 Looking down the other side of the ridge 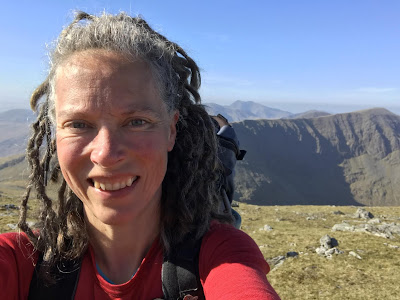 Selfie on Carnedd Llewelyn, with Snowdon in the background

Then I left. I would go back via y Drosgl. I had coffee on Foel Grach, And lunch on the flank of y Drosgl. And then a last drink on the flank of Moel Faban and then I was home! It had been amazing. I hadn't seen a soul between halfway up Cwm Caseg, and the flank of y Drosgl. And the weather was amazing! But with a cool enough breeze to wear long sleeves all the way and not needing much sunscreen. (The puddles on the ridge still had ice on them by noon!) And when I got home my feet were properly done, but I was glad I had gone. Maybe more before this is over? Maybe not quite such distances but a one-nighter once in a while is very nice! 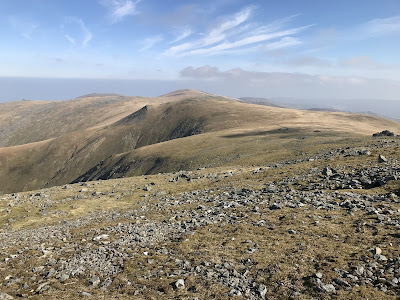 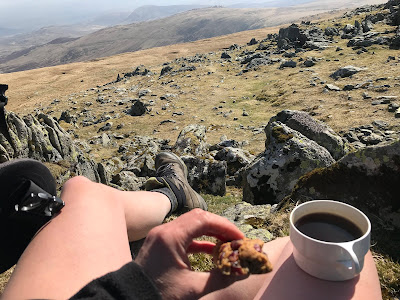 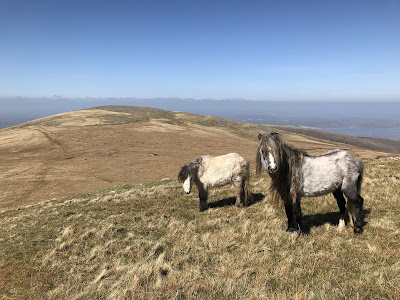 Puzzled ponies along the way. The one on the right was so fast asleep when I approached I thought for a second it was dead! But it clearly wasn't.
Posted by Margot at 07:00