It was all supposed to be done in May! But well, building always takes longer. So when I wanted my very leaky garage re-roofed it was late May by the time the garage was shrouded in scaffolding, and then it took a while for anything to happen with that scaffolding. The roofer came at irregular intervals, and it was only almost finished mid July. Then the fascia boards and drain pipes and whatnot needed to be done, and the rubble removed. And that was finally done a week after my sister left! The garage looked impeccable. It's dry now! I'll need to do a fair amount of reorganising as for now there is too much disorganised wood on one side, and a big clump of stuff in the middle, but I'll sort that! Doesn't even have to be done all in one go. And then I can empty out the conservatory again! And use it for what it was intended to (which I don't think was firewood storage). Great! 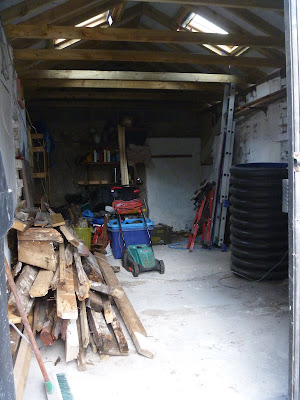 Looking all tidy! But I have a very big pile of firewood to sort out...
Posted by Margot at 08:29