I didn't know there was so much to doors. I had seen doors I liked and ordered them! And they came with Sussex latches and nice T-hinges. Then I just needed to find a joiner to put them in place and that would be it. I thought. But things got complicated.

The joiner that came with the house first said the horizontal bars were too short; they were supposed to reach the side of the doors, and they didn't. And that meant he couldn't fix the hinges to them! Then I thought about it a bit, figured the hinges could go on the other side, and told him. But he came back and said that the doors were too heavy for the frames. Oh dear! And the frames weren't wide enough for the hinges. And I hadn't thought of that sort of things. I really hoped this wouldn't mean I had some £1000 worth of made-to-order doors and associated metalwork and no way of putting them to use. And he was right about at least some of these things; some of the frames are indeed very narrow. Several varied seriously in width over their height! That's what you get with an old house. 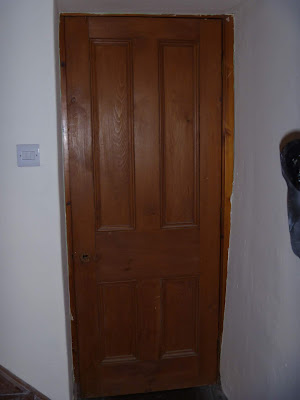 One door with indeed a frame that's not generously wide everywhere

I worried about it. I mentioned my issue to my colleagues at lunch and they got very involved. They thought of all sorts of things! Drill straight through the entire wall. Why restrict yourself to the door frames! Change the door frames (sounds expensive). And some more suggestions of varying seriousness! The most useful contributor was my colleague Katrien who is married to a joiner. She asked her spouse and he thought the joiner had been exaggerating! Maybe he hates hanging doors and tried to get out of the job.

I decided to contact Phil, the man who had sorted out my cupboard. He clearly was good with wood! And he agreed to have a look. And he saw the doors, frames, and hinges and decided it should be doable. He did tell me to decide on which side I wanted the horizontal beams. He figured they could go either side as the hinges don't have to be at the same height as the beams. I'll have to think about that! And for some of the doors, adding butt hinges would be needed, but he'd have to decide door by door.

He offered to do one door on an hourly wage, and based on his experiences give me a quote for the rest. I warned him all my door frames are different but he didn't think that mattered. I accepted! So hopefully the day is saved! Bring on new doors!