In 2015 I had done a trip in a mine which involved swimming across several chambers. That was cold! But it was fun. And that water attracted more people; the year after, we chaperoned two divers up to that same place as they wanted to know if it was worth diving it. They wanted to do a recce! But they needed guides to show where the entrance was and where the interesting flooded bits were. And they had decided it was worth it. And had come back on a day I was unavailable. But there was more to see and they were back again! And this time, I was around.

We met up at the usual place. The divers were already there: Paul and Sue, who had been on that recce trip, and a new guy called Dan. After a while, Phil appeared too. And we loaded up and set off. It's a bit of a slog up the hill! But it was a nice day and the views were nice. 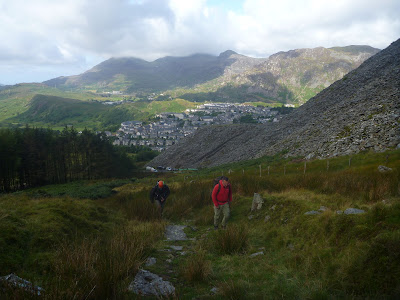 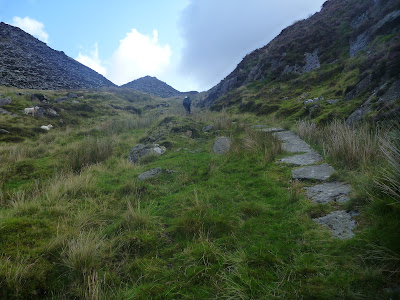 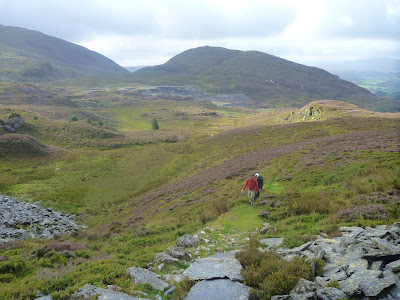 When we got to the entrance, Phil and I got into our wetsuits. We wanted to swim. And kitted up we got in and found the others. They had a LOT more kitting up to do. We looked on! And then saw them vanish into the depths. When we knew they were away (we didn't want to stand on their heads or things like that) we swam to the next chamber. And the next. And there we could hear voices. And after a while we saw their lights! But they weren't coming from the same direction as us. They must have taken some route we did not know about. It was cool to see them swim around deep below us! And their light showed us things we couldn't possibly see well from the surface. But after a while they vanished again. We swam on, to the end. We were quite cold by then! I had been wearing all the neoprene I could: wetsuit, socks, booties, gloves, and hood. Phil made do with only suit and socks. That's cold! 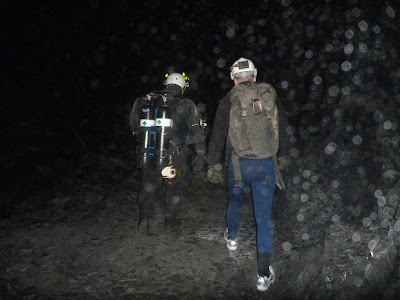 Walking to the water 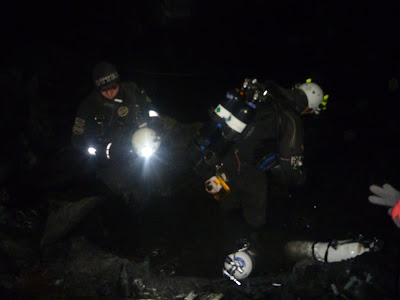 Dan and Paul getting ready 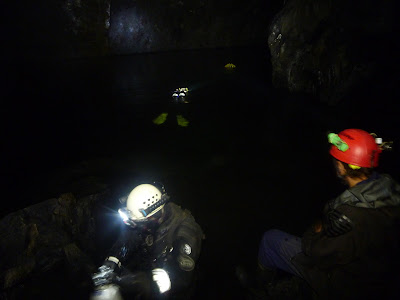 Paul is off (notice the funky yellow flippers) 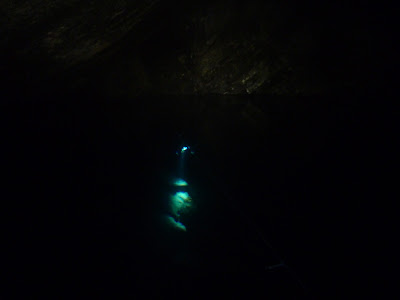 We turned back, but soon heard voices again. The men had surfaced again, and were discussing what they had found. Not what they expected! But after a while they vanished again. And we swam back to Sue. And got out of our wet gear! And drank hot coffee. 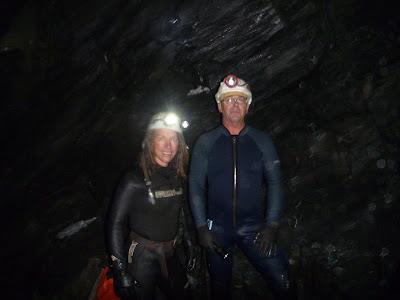 Cold and wet but happy!

After a while the men appeared again. They only had air for an hour or so! So it was sort of time. They got out and we walked back to the chamber where they changed back into their civilian outfits.

The evening before they had brought Dan's oxygen bottles, and Paul had carried his on the day. But now we needed to carry all of it back down! And these bottles are heavy. So we redistributed the kit. Dan carried the bottles, Phil carried his other kit, and I carried Phil's kit. And that worked! We got down without incident.

I had a sandwich and we said our goodbyes. I don't know this place well enough to have a clear idea of what the divers found, and how novel that all is. But I had a nice underground swim! And it was good to have an extra pair of shoulders to carry all that kit down. A morning well spent! And I think the divers will be back; they had run out of lines to set out. They figured one more attempt! Maybe I'll be there.
Posted by Margot at 08:44