Passed my A level!

With my sister visiting I wasn't thinking too much about my Welsh exam. It seemed so long ago! But one day we came home and there was a envelope on the doormat. And it was my exam results! And since you ask: yes, that goes by snail mail. And I had passed! And to make it better: I has passed with distinction!

They even split out my grade (see pic).  And one thing was evident: I read well in Welsh. A 100% score is quite something! But the weird thing is that my second-best score was for talking, and my worst score was for: also talking. I only scored 70% for my recorded conversations (the 'tasks') but 82% for the same thing, but then with an examiner. I'm not sure why that is! But altogether I'm happy! And that's it now for the general qualifications. But there are endless further qualifications possible: Stella, one of my conversation partners, mentioned some. But for now I should just keep my levels up I think! The summer, with no Welsh class, several books in English, and Jenny travelling for a few weeks, hasn't helped... 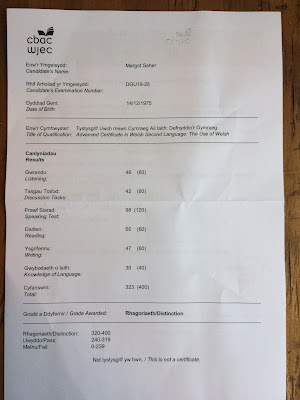