When you get an academic job you think you will mainly be teaching. But once you're going, at least this day and age, you find you spend a lot of time not teaching academic stuff but dealing with students who have mental health issues. So many who have the kind of anxiety that gets in the way of them showing up and/or submitting assignments, or have the kind of mood issues that get in the way of any academic endeavour, or other things along these lines. And that's not quite what you're educated for when you're a marine scientist! So when an email came around advertising a Mental Health First Aid in August I jumped to the occasion.

I wasn't sure what to expect. But I showed up in hope! I went to the room given in the timetable and walked straight into a meeting of the vice-chancellor and various other bigshots. Oops. Several others did the same, until one lady found an email with a different room number in it. We went there. Bingo! Now we could really start.

The course was given by two of the three mental health advisers the university has. And the room was quite full! And they set off talking us through things such as depression, anxiety, psychosis, and substance abuse. And they talked about what is and what is not the remit of a mental health first aider. And what other services there are out there. Sometimes they spoke, sometimes they showed us scenarios played out by actors, sometimes they gave us a scenario and let us discuss what we would do with it, and sometimes they gave us tasks to do. I spent most time working together with Morag from Natural Sciences and Andy from Sports Science. But there were people from all over the university; the Student Union was there, and people from student halls, and someone from Pontio, and what have you. Everyone finds the same thing: there are a lot of mental health issues on the university. And not only among the students! One chap said one of the reasons he had signed up was the regularity of having to deal with tearful colleagues. I'm glad I don't have that experience...

After the first day I drove to Blaenau Ffestiniog to dig. And the day after I was back. We all were! The instructors said this had been their biggest group so far, and the first time everyone attended both days. Blimey! And at the end of the second day we each went our ways. I suppose we will get a certificate in the internal mail. I'm glad I've done this! Nothing we were taught is rocket science, but it still helps to think about it with people with a lot more experience. It's a bit like first aid; that's not rocket science either, but just practicing a bit helps building confidence. I hope I won't need it at all but reality is probably different! 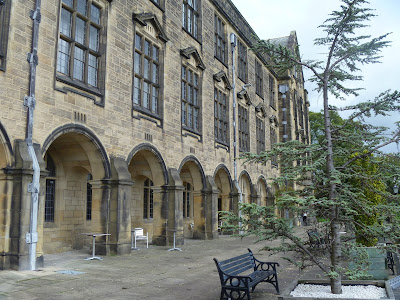 The course was in the Main Arts building