My sister's trip was coming to an end! I thought. But we had the whole Friday. We didn't want anything all too steep, still after Wednesday's carnage, so I settled on a loop from the parking lot in Cwm Eigiau. After doing to much bushwhacking I wanted solid paths this time. So I thought we could walk all the way down to Rowlyn Uchaf, cross into Pant y Griafolen, then walk up the valley to the two reservoirs there and then walk along the hill back to the cars. And so we did! I knew the path into Pant y Griafolen could be a bit sloshy but as far as I remembered, it was never not there at all. We just didn't want to cross from one valley to the other anywhere else because the suggestion on the map didn't exist!

We did the walk. The weather was nice! Sometimes cloudy and blustery, sometimes sunny but always nice. And the walk was good! It's true that the walk into the valley is a bit same-ish (and indeed a bit swampy) but as it is beautiful all the way that's OK. And there were mines along the way! The first was close to the path so Marieke kindly pointed out she wouldn't object to me having a look. She even came along! There wasn't much to see, but I hadn't been before, so I was glad we did it. And we hardly met anyone! Only at the farm where I wanted to cross the river was there a farmer with a quad bike, and where we started on the long straight walk in we saw a car with some pensioners pass. And when we could see the parking lot we saw ant-sized people in the distance. That was it! 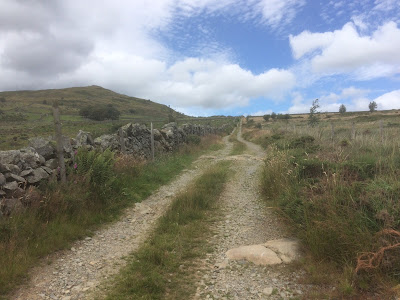 The dirt track leading to the other valley 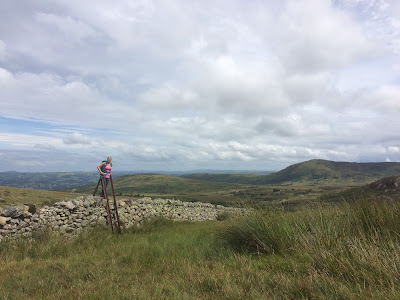 A stile as a lookout tower 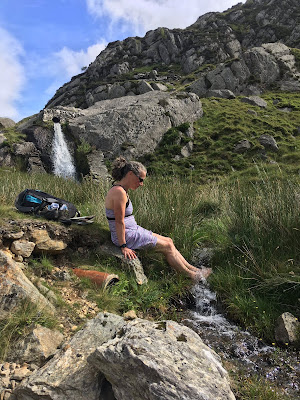 Cooling my feet at the stream coming into Llyn Dulyn. Pic by Marieke 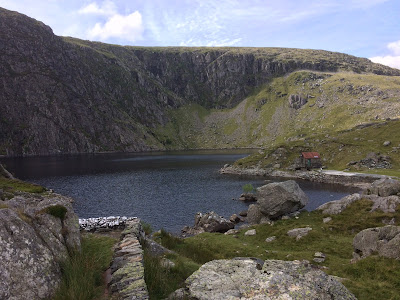 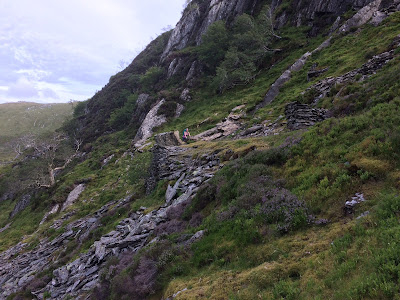 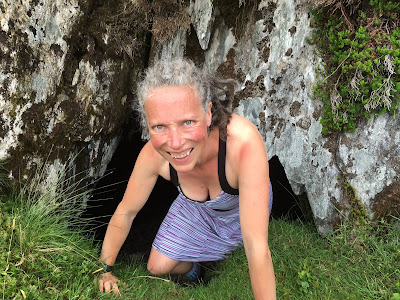 I found an adit! Pic by Marieke 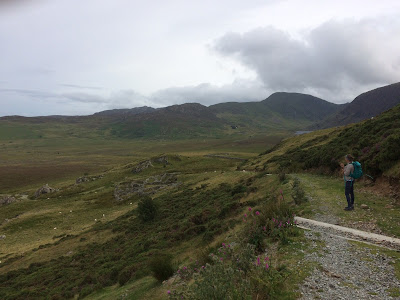 Almost back at the car

When we got home we had the chanterelles of the day before. They were lovely! And as well, things changed. My sister's plane turned out to be overbooked. And she had been keen to stay another day. The heatwave, of which we had only had tow ( not even adjacent) days, was still engulfing Helsinki (where she lives) and she doesn't like heat waves. Anymore. I can still remember one during our childhood and I was zonked but she was fine! But one changes. So as the weather forecast for Wales was cool the whole weekend she didn't mind staying a bit longer. So she phoned the airline and sorted it. That meant we had the Saturday too!

That Saturday a few chores needed doing; I had to pick up my bike from the bike shop, and we needed to do some non-Bethesda shopping. But when that was done we could go for a walk! And I figured we could do Moel Siabod. Over a path, this time. We drove up to Capel Curig; Marieke got to see how parking in the Ogwen Valley gets out of hand on a summer Saturday. We parked up at Pont Gyfyng and started our way up. I had been up to the quarry before, but not beyond. And now I knew the path continued, even though the OS map doesn't show that. It was a bit cloudy but that was OK. The top was not in the fog!

It was a bit of a slog up but we got there. And the path was rather clear all the way! This is clearly the way to do it. We didn't linger and went down again. The path down is quite a scar! 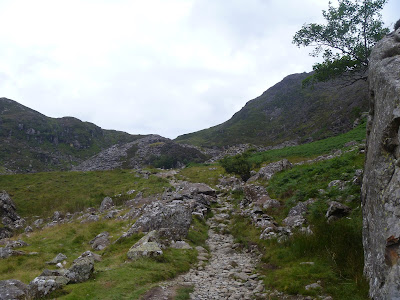 Approaching the slate mine on the flank 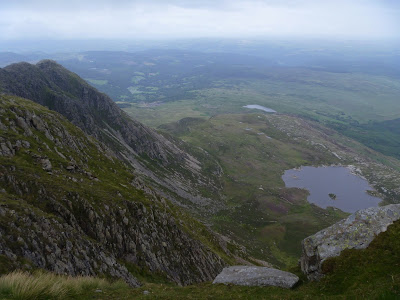 The view north from near the top

When we got close to Capel Curig we first bumped into some young ladies in T-shirts. They didn't seem to be carrying much luggage. It was actually raining a bit. They asked what it was like at the top. When we said 'a bit windy' they weren't discouraged. But a few minutes later we bumped into two blokes. We were really close to Capel Curig now! They were also in T-shirts, and they had no more than a bumbag for luggage. They wanted to know if it was still far! Well, it was. I don't know if the women made it but I would be tempted to put money on that the blokes didn't. Snowdonia on a Saturday in summer!

We walked back to the car while the rain got stronger. It didn't matter! We went home. The weather made my sister extra happy she was still here, as she would have boiled in Finland!

The day after was only a stub end. In the morning the plumber came (blog post later), and when he was gone there was only so much time left for a walk. We just did a small loop in the area! It would have to do. And then Marieke made sandwiches for the long trip, and I brought her to the railway station. And waved goodbye!

I can't possibly remember when I had a guest for that long! But it went well! And we did some amazing walks. And we caught up like nothing on Earth! I mean, writing letters is nice but it's not the same as having a week to just talk. We could do this more often...