I had only been once! And that three years ago. It was time for a return! And Pont y Gromlech seems to officially be a bouldering wall, so it says something about our club's confidence we use it for top-roping, but hey ho, if the climbing is boring, the views sure aren't.

It started weird. Eifion had said he would go early to start rigging, and that he recommended everybody else to meet at Parc Menai to share cars. Nant Peris is famous for its lack of parking spaces! So I went there. Almost immediately, Olivia appeared. Great! And then Catrin drove past and waved. I expected her to park up and join. But no! She didn't reappear. In the end I phoned Eifion to ask for her number, but he said she wasn't coming climbing, and her appearance at the exact time and place to meet with the club was entirely coincidental. Weird!

Olivia and I got in the car and drove up. And there was parking space! Great. In the distance we saw Tony walk up and some little figures (turning out to be Eifion and Simon) already rigging. We walkeup to them. Tony said that when he drove up there was no space, and he had had to drive up to Pen-y-Pass and back to see if the situation had improved. It had! And it had probably been Catrin who had saved us from having to do the same.

One rope was already down. A second appeared soon. We could start! I started with Tony on the right. I had no idea what the official routes were but I saw two possibilities. We climbed both. and Olivia too. Then we did the one of the left as well. Then we were running out of ideas! I tried a spurious crack, but others weren't keen. Tony wanted to try something strange. It didn't need re-rigging, though. I went to the top and flipped one of the top ropes over an edge. Now he could climb something else! But it wasn't easy. He just about managed, with a lot of sound effects. It didn't look enticing!

I just started to give it a try myself when Eifion wondered if we could move the rope even further. Good for me! I wasn't keen on this route. But then we figured we would need to re-rig anyway as the rope would otherwise run too much over the edge. The static rope would have to reach lower to make that work! But we were starting to wonder if we had the energy. It wasn't early anymore and the midges were coming out. We called it a day! And de-rigged.

With so much climbing and belaying i had not had time to eat my dinner. And if you can have it in Nant Peris you should! Olivia was OK with it so I got out my sarnies, and my tea. Nice! Then we left as well. I drove her via Pen-y-Pass; she hadn't been yet. About time! 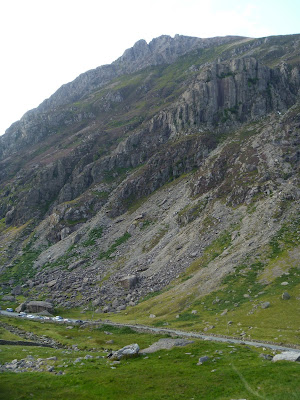 The view from the crag 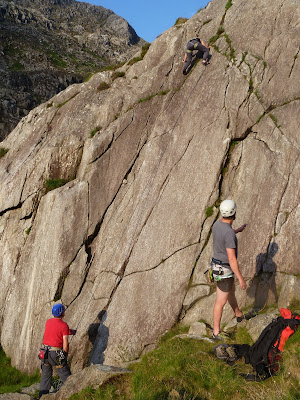 Olivia on the crag