We were going to do a new mine! New to me, of course. It was quite far away: near Penrhyndeudraeth. I drove up with Chris. And when we arrived at the designated lay-by we saw David's car. And an unrelated car pull in right in front of us. It turned out to be driven by a man who likes (and owns) old Rovers so he had quite a lot to discuss with David. And he had an enthusiastic young dog in his car, and the window half open, so that kept me occupied.

When the Rover man left, in short succession both Jason and Simon appeared. We expected Jason (he had suggested the place) but not Simon. And rumours about how his house renovation project was growing above his head were circulating. It was good to see him, especially as he did not look particularly haggard and exhausted and exasperated.

We changed (not into caving suits; this would be a fair walk to a small mine on a nice evening) and set off. We had hoped to find a small path from the very lay-by but we didn't; we had to walk a bit along the road to get to a clear path. It was pretty! And easy to follow. And after a while it started following the Ffestiniog Railway track. 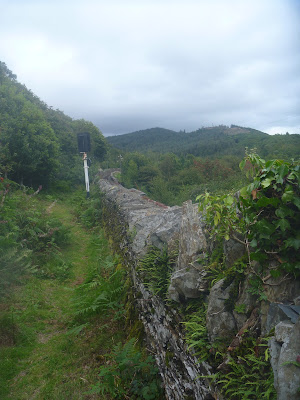 Walking along the Ffestiniog Railway

After a while we diverged from the path. Now we had to find the entrance! And that wasn't easy. We stumbled through the undergrowth, happily eating blueberries and some blackberries, and found some cuttings but no entrances. Until Chris called; he had found it.

It was a bit sloshy! I overtopped my boots within meters of the entrance. Oh well. It went in, around a corner, and split. I went left with Jason. And it lead back into daylight! I clambered out, found myself on the other side of the track, and thought I saw another entrance behind a wall. But I came back to report back. 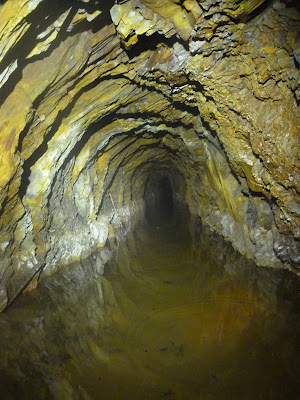 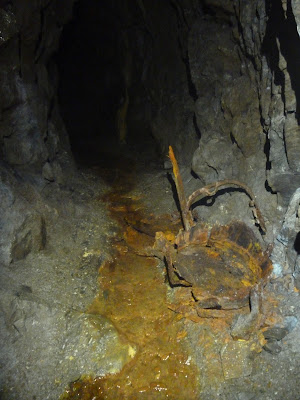 Kibble (?) along the way 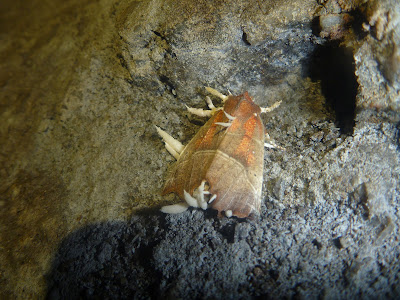 By then the others had explored the right branch too; that only went a few meters and stopped at a collapse. Hm! Not much to this mine. But I wanted to have a look at the possible entrance outside so I got out again, climbed over the wall, and checked it out. Nothing! I checked out a cutting too: nothing. Oh well. I clambered back. And we went out again on the other side.

We had a sarnie outside the entrance. And walked back! It was still early. It had been a nice little trip.