When I found out my bedroom wall was damp I first thought of a roof (or wall) leak. Then it went away when I did and it looked more like an effect of my breath. But why was that so bad? I breathe in all rooms I sleep in! And the ones I do other things in. The neighbour suspected that it was a ventilation issue. There was a ventilation vent in the room but it had been in the 'closed' position. That sure wasn't helping! But opening that would only help if the conduit behind it would be open. It must have been the duct for the open fire in this room. All rooms probably had one! The house has three storeys and six chimney ducts. And especially when you have a wood burner on, one duct gets warm, and then you can have condensation in the others if they aren't well-ventilated. So when I was working on that room anyway, I unscrewed the vent. And it didn't take a certified chimney sweep to diagnose that indeed the chimney was blocked. Without much persuasion, a lot of muck came out! I'll have to phone my chimney sweep again. This isn't good. But hopefully, when I have this sorted, the problem will be solved! 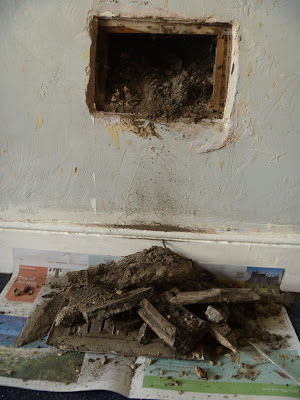 I think I may leave the rest to the chimney sweep