When I gave the plasterer the job of re-roofing the garage (or rather, managing it, as he sub-contracted a scaffolder and a roofer), I asked him if he would leave the waste wood behind. And he was happy to do so! And he said it would be quite a lot.

Quite soon he piled some cut-up bits against the wall of Neuadd Ogwen. I managed to fit in into the conservatory. The garage itself was first not waterproof, and then not accessible due to all the rubble at the entrance. It was cut in too large bits to fit into the wood burners, but hey, this was already a lot less work than cutting it all myself! But they didn't do this with all of the wood. When they handed the garage back to me it had an enormous pile of beams and planks and whatnot against the wall. I had a job to do before I could take the thing back into use!

After my Mental Health First Aid course I was home early. So I changed into pragmatic clothing and got my bow saw ready. And set to work! And I got quite a lot done that afternoon/early evening. It was nice to be in there, hear the rain on the roof, and see no water actually get in (except through the open door)!

The next day I continued. I didn't only have to cut; some of the beams were nailed together. There was quite some improvised repair in there! Sometimes a rotting beam had just had a fresh one nailed to it. But I had to either saw through both or try to pry them apart. I chose the latter. And prying a beam of another beam is a lot easier if one of the beams is actually attached to something! And that wasn't the case. But by using a crowbar and a claw hammer at the same time (my second crowbar has gone missing; I think a workman mistook it for his own) I managed. And I cut everything small enough to fit the stoves. And piled it up against the back wall of the garage. As good a place as any! And the pile grew and grew. When I decided it had been enough around half past three (I was not quite done, but I don't want to spend the entire weekend sawing) the pile reached pretty much eye height. Not bad!

I now have some tall wood left. And a bucket with small-ish bits. And the rest of the mostly-cut pile from the conservatory. And two bits that were so thick my bow saw would struggle with it. So still stuff to do! But at least I have cleared the entire messy pile! And that also means I can start re-arranging the garage! And use it to its full potential. 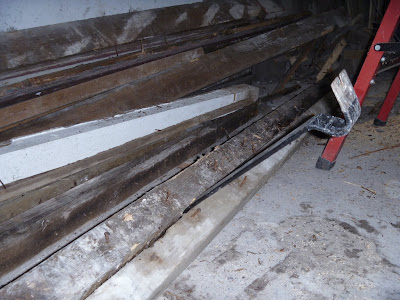 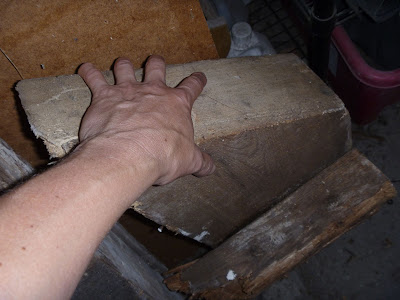 Too thick for my saw! 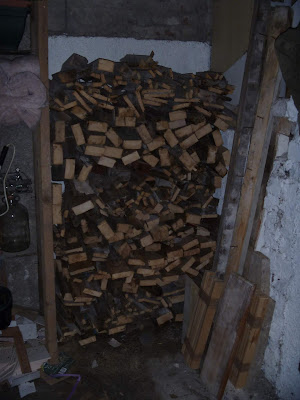 A lot of firewood! 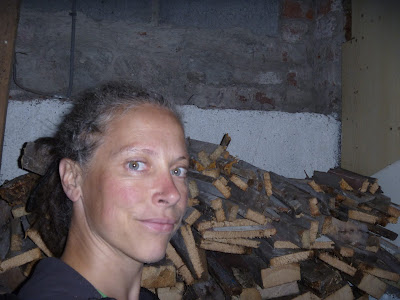