Roof neat, floor not so much

The roof of the garage is tiled! The edges have to be sorted but the bulk of the work is done. That's good! But the not-so-good thing is that the work has resulted in a lot of waste. And the roofers have decided in their wisdom to dump it all just behind the door! And most of that is damaged roof tiles. And balancing over a big pile of those isn't ideal. So I have had trouble getting things out of the garage! The first time I gave it a try I was just balancing on the pile in my office dress when I heard footsteps nearby. That was a bit disconcerting. My garage is not on the way to very much. An unknown face appeared peering in and I asked what the owner was doing there. I was a bit brusque but I felt a bit vulnerable! The man turned out to be living nearby; he was on his way to his garden gate. The only thing that makes you pass my garage other than (the back entrance of) Neuadd Ogwen! That was a bit of an awkward coincidence. Later I saw him again. But then I knew who he was.

That lead to rather long grass. I've done one big mission where I rescued things like the lawnmower and such, and keep them in the conservatory now, but I hope they come and tidy up soon. I'm barely extremely fussy about tidiness but this makes the garage a lot less useful than it can be! 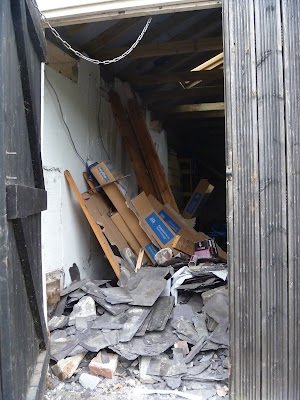 Slightly impeded entrance into the garage 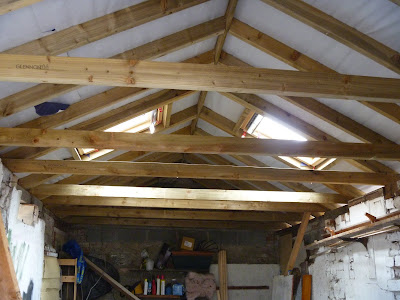 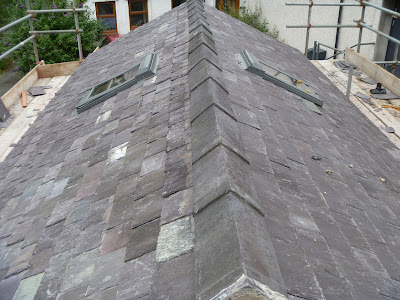 Seen from above! The original tiles are all on the left