The house clearly has an attic! But how to get there? It didn't have one of those handy trapdoors that has a ladder that unfolds itself when you pull it open. And I didn't own a ladder. And the neighbour owns plenty but I feel a bit bad about asking him all the time. And as well, would I get a ladder into the room? The corners are tight! And where would I put that ladder? There was a double bed (for a lot of time even two) in that room!

Then it was summer and I figured I needed to act. When term hits I won't have time for anything! So I had bought an extending ladder (easier to get around the corner) a few weeks earlier. And now I moved the double bed out of the way. Time to have a look! I had reason to assume I wouldn't find anything too exceptional as the electrician had been there when he was rewiring the house. If there would have been dead bodies there or colonies of bats or whatnot he probably would have told me! But now I would see for myself. I first removed the trapdoor. It looked kid of OK there!

Then I wrestled the ladder into position. And got up! It looked tidy. There even was a little lamp! But since the rewiring, it wasn't connected anymore. The rood was in fine condition, and there was a lot of insulating material on the floor. The floor itself was quite messy, but that's OK. I had a good look and took some pics. Then I decided I didn't really need to go back. I'm not going to use that space! And the insulation looked OK. But it's good I know now what's there! 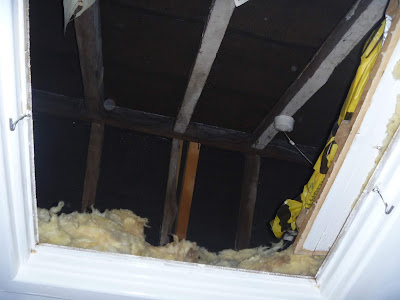 This is what I saw when I took the trapdoor off! 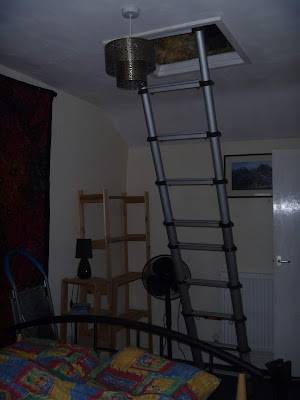 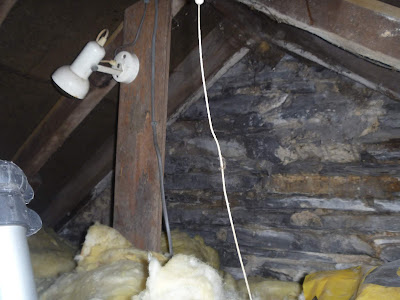 So snug; a light! 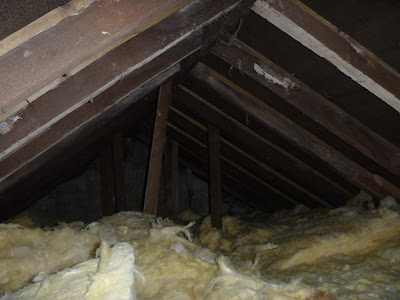 The other side
Posted by Margot at 10:09