My built-in cupboard was a mess! The ceiling was caving in, the back wall showed the scar of a beam or something, that had been plastered around, and it had half-torn-off bits of wallpaper. There were two shelves but one of the had a big hole in it; I assume that was where a previous boiler had been. It wasn't good! So I phoned a bloke who had been recommended to me by Phil (also called Phil; he had already looked at my roof the previous year) to see if he was willing to do something about it. And he was!

He came to have a look and figured he could work with this. So a few days later he came up with whatever was needed. I gave him a key and left him to it. And when I came home he was done! The cupboard looks spiffing! And the old shelves will be added to my already substantial stock of firewood. Now it's my job to do the rest! Pull the wallpaper off, apply filler where needed, and repaint. And then the top floor is done! 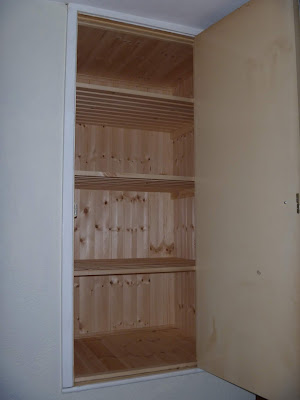