I thought I had enough to do in the house! But one day I suddenly noticed something unpleasant in my bedroom. Black patches on the wall! Mold! oh dear. I figured that meant a leak in the roof. Just what I need!

I mentioned it to Phil and he said it would more likely be a wall problem. If my rendering would be damaged water would slowly trickle in! And then I remembered the satellite dish I had pulled off the wall. I hadn't filled the holes! Oh dear. I should go back to these holes quickly and fill them.

When I later looked a bit closer I noticed most was actually on the gable end of the house; not where the satellite dish had been. So maybe it wasn't that after all. But I still think I need to fill these holes! And then ponder the wall in total. This was the gable end Rose had had re-rendered! So how could that be so leaky? Was there something else happening after all? I think I have to do more research. And some of that will probably involve going into the loft! From there I might be able to see if there are some wet patches, and where... 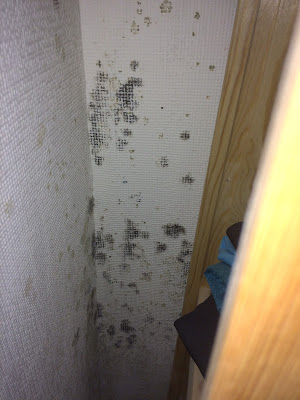