Scampering about in Drws y Coed

The Drws y Coed valley is a bit infamous; it often has a really cold gale blowing through it, possibly combined with horizontal rain, and if not, it can be midge-infested. But we had done a trip there some two years ago and we had left some to be explored. And finally we went back!

I drove up to the designated meeting spot and found Ed and Chris there, but not their cars; they told me we should park elsewhere. I did. And packed my bag with my kit; I did not want to first walk back to Ed and Chris, and then up a hill, in my way-too-warm caving suit. But then all others arrived, including Mick whose idea this had been, and he said we had better start off from where we were parked. Great! I went to fetch Ed and Chris. When we had them back we decided to go for a recce first. The mine was only a stone's throw away from us; we could first check what kit we needed and only then go and get it. No need to lug unnecessary heavy kit up the slope!

We went east to west. We found lots of entrances! Some I found very interesting. Some I recognised from a through trip in Simdde Dylluan. Some only went a meter or so, or were flooded up to too high. When we had seen it all we went back to the cars and kitted up. We didn't bring a drill; we had seen no need for one. And we would go east to west again. We started at a hole Edwyn was interested in. He started rigging it. I figured it'd take a while and scampered off to check the next hole on I was curious about. I had stuck my head into a tight hole coming off an adit; it looked possible, but not without a suit and a hat and suchlike. Now I had that! So I squeezed through. I found myself on a slope next to a vertical hole. I managed to turn around and clamber down the hole. Would it go?

It went! I clambered down the rubble to a level with a beautiful flooded winze in it. It went both ways! One way into a partially flooded level and the other to yet another flooded winze. Cool stuff! But I figured I should go back as the others would get worried about me if I wouldn't reappear. So I clambered back up, and saw Ed at the entrance. Just in time! Ed said Edwyn's descent hadn't yielded much, and he was glad to hear mine had. But getting Ed in was not a sinecure; he is way too tall to turn around on the slope. The men went to get a rope to make things easier for him. With the rope he went in feet first. I put his feet on foot holds. He got down! Then he helped Don down and I went onwards. Time to explore further! First towards the second flooded winze. I scrambled over it and got to the other side where I found a flooded stope. It went on beyond it but you couldn't get there. And there was a pile of bits of foam. It had been taped together but the tape had disintegrated. It looked like it had been a kneeling mat. I took it out. 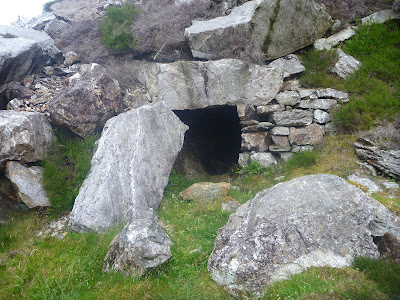 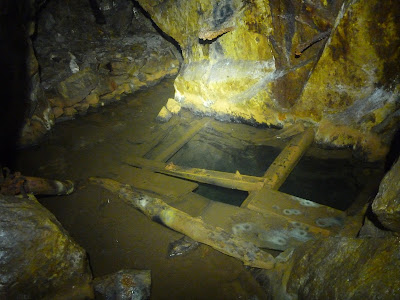 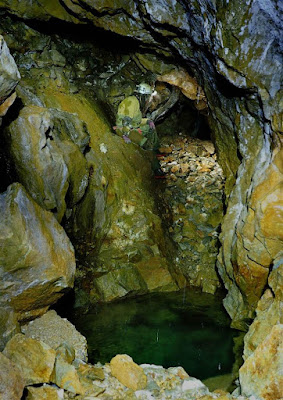 The second winze (pic by Edwyn) 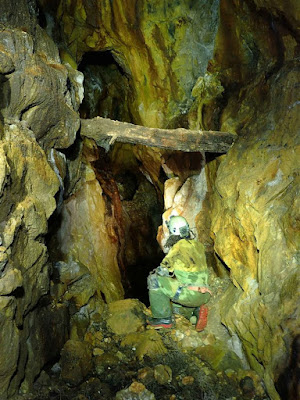 The flooded stope (pic by Edwyn) 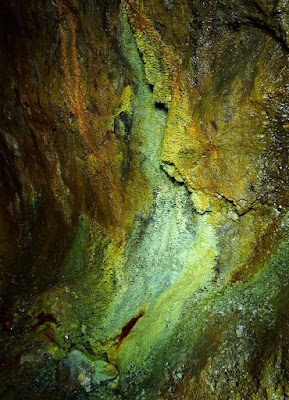 The level with water in it just ended in a blockage, as expected. And it overtopped my boots! Edwyn took pictures. After a while I came out to avoid a traffic jam on the scramble out. I found Chris. And I had a sarnie. One by one the others came out too. It was rather busy with midges!

I was also keen on the next hole along. I scampered up with Jason. There was a small chamber with a possible scramble up and a squeeze on. I went up and Jason went ahead. I found I was at the bottom of a small stope we had come across in our recce. No need to drop that then! I also got into a very short level that lead from the stope. The men told me the way on was a bit dull. So we went out again! And were descended upon by the midges again.

The last thing we did was go into the adit. I went in (overtopped wellies again) and after a while I recognised it as the exit of the Simdde Dylluan through trip. So I had been there! And explored it all. Not that there was much. So I went out again. And hurried to the cars! And changed. I wasn't keen on hanging around. I never am, but with midges out in force even less so. So soon I did a round of saying goodbye. But where were Jason and Ed? They were still in there! Oh dear. I decided to scoot. I hope to see them next week!

We had now explored most feasible entrances we had found. We had left (not really on purpose; more that we hadn't got around to it) one drop. There already was a bolt in place! We would have to go back yet again. Maybe next year!
Posted by Margot at 10:27