You don't know what you've got 'til it's gone! It's true. When my car broke down I became quite aware of how handy it is to have one. First of all, I couldn't throw my bike in the back and deliver it to the bike repair shop. I had to bike in (in the pouring rain, as it happened) and then walk to the office. And with my road bike also gone (be it temporarily) I was even less mobile. And in only three days I wanted to pick my sister up from the railway station. And how can I get to mines without a car? And to the crags for climbing? So I decided I should get one soon.


When my car died on a Thursday night I got home still full of adrenaline, so I started looking for other cars immediately rather than going straight to bed. Something small and affordable! Not necessarily as low-budget as the previous one, but I still don't see the point of buying a car that's so expensive you worry about it. And I texted David. I would need him to help me buy another one!
The next day I settled on Citroen C2 I wanted to see, and tried to make an appointment. It was in Bangor; that's easily biked. And then I can immediately try of the bike fits in the car! Not unimportant. And I wanted David to come with me! And this fell through; before I could mobilise David the car was sold to someone else. Oh well. David indicated he needed a calm weekend but he was willing to provide remote advice. Well, that’s already a good start!

When the C2 was gone I restarted my search. I sent him an ad for a Volkswagen Golf. He didn't like the thing. Too many fails on its MOT history! Then I also saw a Vauxhall Corsa. I asked David what he thought. I had checked its MOT history; it had sailed through every single time. Good! But David would know of more things to look at. But no reply yet! I didn't want to do the same thing as with the C2, though; wait until David is available and see the car be bought from under my nose in the meantime. So I just booked an appointment with the seller. And just hoped David would respond before I would get there! And I had hoped I could bike; I found the car on Facebook Marketplace and they give a rough indication of where the seller is. It said 'Bangor' but I hoped it would be a bit further south. But no; it was on Anglesey, actually; in Pentraeth to be precise. So that was the end of the biking thing. Pentraeth is a bit too far. Especially with my old bike! (Since the new one was at the bike shop for maintenance.)

I took the bus at 9:04. No answer from David yet! In Bangor I had to change buses. I got to Pentraeth at 10:08; that again shows how handy a car can be. Pentraeth is only 20 minutes by car! Anyway. I soon found the bloke, Robert, who had put the car online. It was parked at a garage. And Robert said it had belonged to an elderly relative, who now had given up driving for reasons of eyesight. I know that's what you are supposed to say as someone trying to flog a car but it did fit with the mileage it had done. It was a 12 year old car with only some 60.000 km on the counter! And the car came with a service booklet; it had been annually serviced by this very garage. And what do I know; they migth have done a crap job with it. ! But it looked solid. I asked the guy to take me for a spin and he obliged. All was well!

I had no further questions and decided to just chance it. I would hear from David afterwards what he thought! The bloke took me into the office and we sorted the paperwork. I paid over PayPal. And sorted my car insurance online. Robert gave me a cup of tea. And then it was sorted! We shook hands and off I was. Blimey!

Driving a new car is always a bit awkward. How do the lights come on, where is the reverse, how does the radio work? But I got home without issues. I immediately taxed it. Then I put my university parking permit in and found Radio 4. Done! Ready for the road! And David appeared on the radar again and said that the car looked good. Excellent! I'm sure he'll have a good look next time I see him. I hope he will still like it then!

I'm mobile again. And now I can pick up my sister up by car! And we are not restricted to either walks from the front door, or walks started on the Snowdon Sherpa. We can walk anywhere! And I can also get to the dig and anywhere else. And how I will get large things to the recycling centre is something I will deal with once the situation presents itself! I shall now see how I like the life of a Corsa driver! 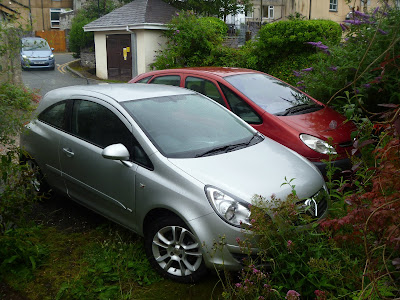 For only an hour or so the two cars were parked side by side!