It has served me some 3.5 years! Not an awful lot I suppose. But it did well! It carried me everywhere without complaining. And it cost me only £640 so I assume it was £200 per year. Excluding tax, insurance, fuel, and repairs. Especially the latter! Blimey I think it cost about £400 to get it through its first two MOTs. But still! Some people buy a car new, for, say, £20.000 and I doubt they get 100 years of driving out of it. I think it did its job!

The car was very big. I bought it when the ThursdayNighter trips required a big car. But times have changed! Back in the days we could either go in one big car with 4 of us or go in more than one car. And with the Picasso the former option was actually an option! But then we stopped going with four people from Anglesey and the car became too big. Although its size was a boon when I moved house! There isn't much my car couldn't transport. But I'm done moving house and have no plans doing it again. That means the car is now way too big! I wasn't sure when to get rid of it. I figured I should wait until my new doors would be delivered. (The house has mainly hideous doors that don't fit so I ordered a new set, made from reclaimed wood.) That would mean the old ones would have to go. And my Picasso would have no problems with a set of doors! Any other car might. So I figured that the moment these doors would have been safely delivered to the recycling centre would be the moment to start looking for a new car. But things didn't go that way.

When we were walking back from Seler Ddu I discussed an issue with my car with Jason. He used to have a Picasso too! And he was rather scathing about it. He liked his Citroen but as soon as anything serious happened it wasn't worth repairing. Hm! Oh well I'd wait for the doors and get rid of it.

Then I drove home. I got to the One Stop petrol station and the engine started sounding a bit off. And it felt off too. Oh dear! And then only a few hundred meter on the engine light came on. Oh dear again! It started smelling weird too. I was worried!

What to do? I decided to see if I would make it home. I was on the A5; over large stretches it's a two lane road with a wall on either side. Break down there and you have nowhere to go! You would be in everybody's way. And it's a winding road too. I have in the past come across cars having broken down there; you see it rather late. So best not to go there! I ploughed on. The car just about managed to get to the maximum speed. And I made it home! I was driving on adrenaline. And I knew this would be the moment I would get rid of my car. I am not driving that thing again! As it is an old thing that's quite rusty and really struggles to get through MOTs I figured it wouldn't even be worth trying to find out what it actually was that was wrong with it. Years ago an AA man had already verbally written it off. And as said, it only had one more task before I wanted to get rid of it anyway! So it would just go. But now I just wanted to get in and rejoice in that I had made it home.

I pretty much immediately started searching for another car, but that's for the next blog post. Considering the old car; I had heard of that you can give these to charity. So I registered mine on giveacar.co.uk and chose a charity. They phoned me back about it, and after figuring out how old the car was they decided they would have it scrapped. I suppose that makes sense. I wouldn't buy this as a car! The sad thing was that they said it would get them the grand total of £13. Oh dear! So much metal, worth so little. Even the Fiesta yielded more (no less than £18!) But even £13 can make an incremental difference so they went for it.

The giveacar people said a scrapping company would get in touch. That happened the next day. And they could pick it up that same day! I quickly removed my parking permit, spare liquids (oil, windscreen wash, antifreeze), mallet (for getting the wheels off), road atlas, satnav and torch from the car, and put the seats and the parcel shelf back in. Ready! I also retrieved the paperwork. And saw if I could drive it backwards a bit. I got two meters before it refused! Oh well. I decided to have a coffee waiting for the scrappers.

They appeared. And they wanted to know if it drove. Eh, well, maybe! But they managed to start the engine and run it. It was clear to them there was something wrong; they said it was running on only a few cylinders. If they say so! Not sure why but it had become an academic question.

They filled out the 'transferring your vehicle' slip and I gave them the rest. And then they were off! They would actually drive the thing to wherever it went. I suppose it's different if you know what's the issue with the car. It turned out of the street and that was it! Thank you, Citroen, for 3.5 good years! 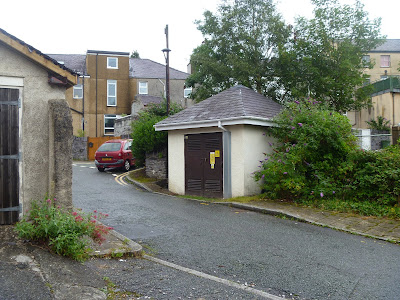