It took me a while but I've got rid of the entire clump of earth with the ferns on top! Blimey am I tidy. On Monday I normally go climbing (in summer, at least) but this Monday I saw the weather forecast, and although it wasn't officially cancelled, I dropped out. I don't know if any climbing happened! But I had been driving all the way to Deiniolen (I know, it's not very far, but I think one should ponder every mile for environmental reasons) only to rain off the crag in minutes. But that meant I had some time! And after a day in the office I wanted to be outside. Where the remains of the clump still waited! So I set to work with my spade an bucket, and before too long it was gone. Success! And all the soil is spread out over the raised beds. And a bit on the lawn. Some of it to fill depressions, especially where I often put the garden table, as it wobbles on uneven ground. Now I should level the new bald patch a bit and sow grass. And then it can become part of the lawn! 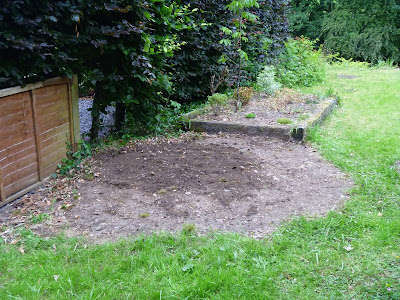