Fail entirely to climb in the Ogwen Valley

I wasn't sure how long I would want to be at the graduation reception. Graduation was on a Monday, so it clashed a bit with our club climbing evening. I did think the graduation reception had priority! This is a unique day for the graduating students. I can climb every week. So I  had let the club know I wasn't sure if I would be there, and I might be late, and I would travel independently (no car-sharing this time). But I had seen enough fairly soon so I got home, changed, and drove on to Gwern Gof Uchaf where we would be. But there were no cars. Weird.That meant there were no climbers. But I decided to walk to the crag anyway; maybe they had hovered there? And at least I would be somewhere pretty to eat my sarnies.

I had my dinner on the rock. The view was nice! But then I went back. But when I drove past Gwern Gof Isaf I saw a familiar vehicle. It was Glyn's rather recognisable van! So there were here! Somewhere here. 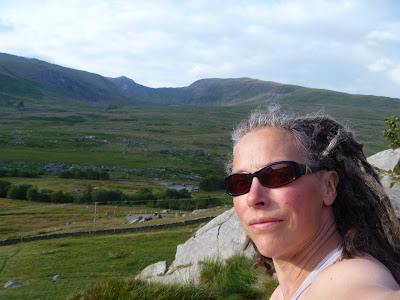 I decided to stop and look for them. I walked up the public footpath. And then I saw two little figurines on Tryfan Bach! But how to get there? I bushwhacked a bit. And then I heard my name. It was Eirian! One of the climbers. She was just on her way back to the car. She had only come for some fresh air and the view, she said. But she said the path she was coming down on lead past the bottom of the crag. So I went on. And I saw Glyn and Kamal. And the vanishing figure of Ika high up on the slab. 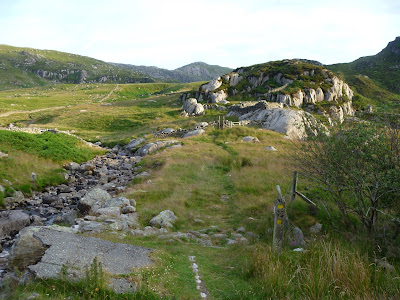 Pretty path towards where the climbers could be 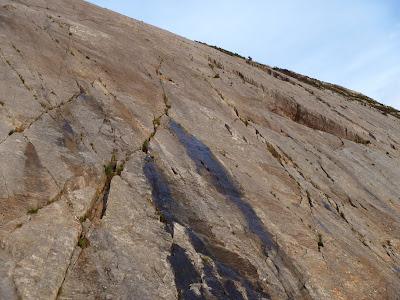 Ika on the crest of the rock


It's a strange crag. It's not very steep at all! I suppose one could scramble it. And it was an area of trad routes, and long ones at that. We didn't have long enough ropes so it was a multi-pitcher for us! And that is an awful lot of faff. Glyn, Kamal and Olivia had just done a route and would do another one just now. They said they could lead and second it and throw a rope down for me, so I could climb too.  Kamal set off. I went up to see if I could scramble along beside him. 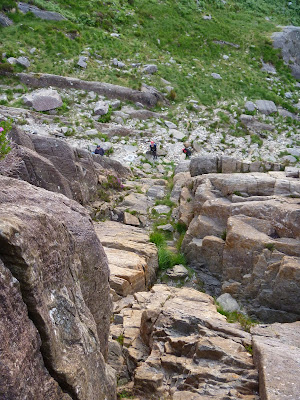 Looking down from the scramble up

I went a fair way but I didn't think it looked safe enough to get all the way to the top. I went down again. Kamal was at the top and Glyn started seconding. I got my shoes and harness on; hopefully I would climb soon! But Glyn had to get up to the top of the first pitch, Kamal had to lead on to the top and create a belay, then Glyn had to follow.... it took forever. And then they had to get the rope down to me. Just throwing it down didn't work on a slope like this! The rope just lay on the route, out of reach. They tried again with a bag. That was better! But didn't quite get there either. I wondered if I could scramble to it from the side, but t was difficult to communicate with the chaps out of sight at the top. And it was getting late. And the midges were coming out. So when I saw them pull the bag back up I just let them. No climbing for me today! 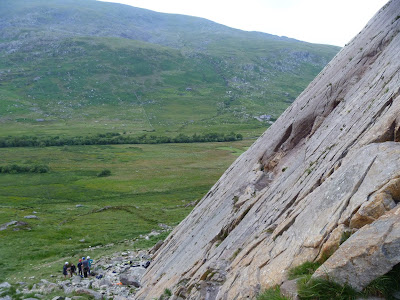 Small climbers at bottom of slab

I went down to Eifion and Tony. The others had already left. The men were thinking of a scramble out, but when they felt the midges they decided against. Together we left. Altogether not a very satisfying evening, but I had had dinner with a view, saw some of my friends, and seen Tryfan Bach, which had fascinated me from a distance for years. So it could have been a lot worse! Even though the bushwhacking had left me with a tick (duly removed once home). Next week I won't be climbing, and I hope things go better the week after that!