With moving to Bethesda my approach to bikes changed! As I now has a sizeable bike commute, I wanted a good fast bike for the first time in my life. But in order to keep it good and fast you have to maintain it. I have less than half the skills, and not enough of the time, so I decided I should bring it in to the local bike shop for maintenance once in a while. How often I wasn't quite sure. But after about a year the brakes became very, very noisy; that was a sign of dirt and wear. So the time had come! And then when my sister would visit I figured I wouldn't need it for a week so I could book it in. And I did!

My plan had been to chuck it in the back of the car and deliver it like that. But the car had just died the night before! So I had to bike it in. And it was forecast to be the rainiest day of the month. Just my luck. But a woman's gotta do what a woman's gotta do! So in the morning I got on the bike in a shortish skirt (what you don't wear doesn't get wet), waterproof covers (well, that's what they were sold as) over my shoes, and my waterproof jacket and went into the downpour. I was about to leave Bethesda city limits when it dawned on me I might not have my wallet on me. And I didn't! Oh dear. I had to turn back and try again. By the time I got home I was already quite wet. I had little to lose.

The bicycle shop is in the southwestern edge of Bangor. The bicycle path brings me to the northeastern end. So I had to find a new route! And I have a thingy with which you can fix a map to your handlebars but I haven't manage to find that since moving house, so the map had to go into the bag. I would have to remember what was on it. What could possibly go wrong.

I biked to Caerhun without issues, And there I spontaneously forgot to turn right. That lead to me ending up at the Vaynol Arms in Pentir. Oh dear! I then decided to go back a bit and go north past the electrical station (or what do you call these). It was a lovely route! But it had a tree lying on the road. Luckily my road bike is small and light and I could lift it through/over without too much hassle. Then I took another wrong turn but that didn't matter. And then I finally got to where I should have ended up in the first place.

All dripping I presented my bike. The bloke said it needed new brake pads, a new chain, new ball bearings and possibly a new cassette. This commute is heavy on the poor old thing! But that's exactly the reason why I brought it in. He advised me to replace the chain regularly. That saves you having to replace the cassette too often! My chain was all stretched. 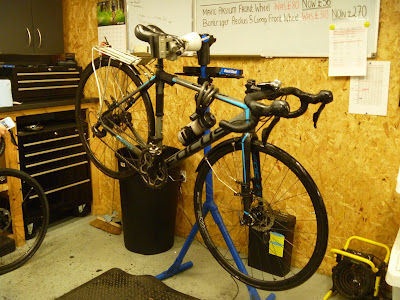 Bike in position for a check-up

While he sorted the paperwork I took off the show covers. My shoes were soaked anyway! And after he'd given me the paper slip I started my way to the office. The bike shop is south of the hill most of Bangor is built on, so I had to cross it. I knew there was a path from there to hospital, so I took it. It was pretty! And from the hospital you can (when on foot) take a one-way street down on the other side. And then cross the bridge. By the time I arrived I was soaked. I had made sure I had dry clothes on me! 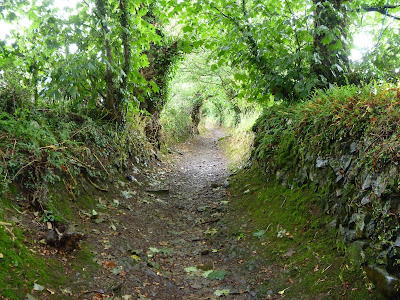 The path from the bike shop to hospital

Later that day I hitched a ride home from Kate. And the next week I wouldn't bike as my sister would be visiting (blog post to follow). And the weekend after I picked it up again. In my new car! And with the back seats down it fit in without taking the front wheel off. Good! They had replaced the chain, the back cassette, some ball bearings, some gear cables, and whatnot. Oh yes the handlebar tape. Pretty much only the wheels, frame and saddle had remained! And they said it had quite some wear and tear. Maybe next time I bring it a bit earlier! And I can now tell when: I bought a gadget for checking how stretched my chain as when I was there anyway. Not sure I am keen to replace said chain myself. I have done it in the distant past but it's not a chore I like! But I look forward to riding my as-new bike again!