I had built a shed! Together with Monique. What a good idea, Thought the local wasps. It was only just there when I spotted a wasp (a queen, I suppose) making a ping pong ball-sized nest. Hmm. Wasps. I'm not a big fan! But I am a fan of creatures living peacefully together. I decided to not interfere and let her build it. And she did. And kept building. And one wasp became more wasps. And then it was a very large nest. Sometimes when I come in to get my garden furniture (as that was what it was built for) I disturb them; I suppose it's hard not to, as it is not a particularly sturdy building and walking in makes it shake a bit. Sometimes the wasps become agitated and I beat a hasty retreat. I then wait a bit until they've calmed down before I go in again. So far this has worked! And the wasps do shit quite a lot so I should try to not put the furniture directly below the nest. And I assume nests are one-season structures. If I get through summer without wasp incidents they will be welcome to build another nest next year. But if it becomes cumbersome I will remove any ping pong ball-sized nests next year and hope they'll go elsewhere. The garage, for instance. That had its share of old nests, although these were never bigger than a tennis ball! This one is a respectable melon. Or somewhere else entirely. 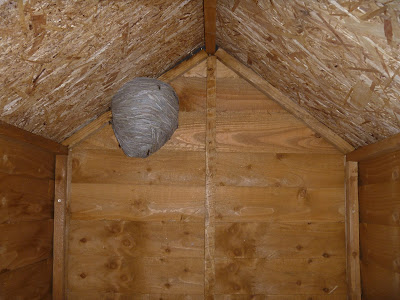