I almost climb every week now! It's fun. And this week we'd climb Castle Rock Quarry, so on limestone. I'd climbed there several times before, but the last time had been over a year ago. So I didn't mind going back!

We were only with five. And we went to 'the Lost World'; the usual crag for us. I volunteered to lead Taid. Eifion lead Nain. With an uneven number it was relaxed climbing; there was always one person without anything to do. But it shouldn't get too relaxed so I went back to Eifion's car to get a third rope, and had a go at Ffrind. That worked too! But that left only one route on the crag: Zimba. I could remember having had trouble with that one (the previous time I didn't get past the first obstacle) so I didn't want to lead it. But I thought it may be possible to rig it from the top. And everyone who wanted to had climbed Taid so that rope could be re-positioned. I scrambled to the top, got the rope out, found the top of Zimba, and manage to clip the rope in. Then I threw it down. I thought! It snagged. Of course. That had happened before! I can't find it on the blog but it did happen. I think it was Taid I rigged from the top that time. And had to abseil on my belaying device to get the rope out of a tree. And that happened again! But it was OK.

I then tried climbing it. I still struggle with the first bit! Olivia did it too. She did better. Although she saw exactly what I had found difficult about it! Eifion didn't have much difficulty with it. The other ladies weren't keen. So that meant we were done! And rightly so; it was getting late. But a good session! 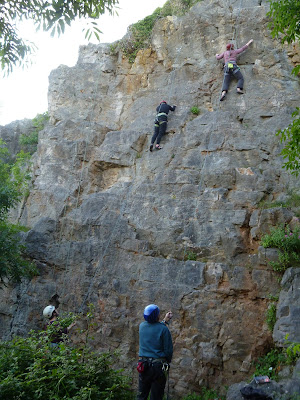 Olivia on Ffrind and Eirian on Taid