I mentioned I had had my first speed ticket! And I wondered what happened to people with foreign driver's licenses. But now I know. We get offered speed awareness courses too! And I accepted. The other options were: pay £100 and accept 3 points on my license (so that answers the other question: can a foreign license have points), or go to court. I don't want to go to court, and I figured it's better to be educated than carry one's flaws around for 3.5 years (as seems to be how long they last) so I decided to register. But that was easier said than done! I was directed to a website. That said there was something wrong with my details and that I should contact the provider. The provider said there was something wrong with my details and I should phone the police. The police said there was nothing wrong with my details and that they had no idea why the provider couldn't book me. Just to be on the safe side they gave me a new pin number. This was getting tedious! But then I phoned the provider again and they managed to indeed book me. And they could book me for the next day! Let's get it over with. And the course, even though it was advertised as costing £186, turned out to be just under £100 so I lose no money over it (compared to taking the fine), only 4 hours of my time.

I got to the course. There were many of us! And North Wales seems to have more speeding men than women; 13 of the 22 people were male. And we had two instructors. They don't have a nice job! Nobody wanted to be there. But then again, how often do students want to be in the lecture room? And these men made the most of it. I had been mentally ready for four very dull hours but I ended up positively surprised. The instructors were entertaining, the fellow attendants were nice, and I learned a few things. I hadn't realised how big the difference is between trying to stop a car doing 30 mph and one doing 31 mph. I didn't know that wherever there are streetlights and no indication to the contrary, the speed limit is 30 mph. Or the details of how the national speed limit is what for various types of vehicle.

The instructors also managed to put the hypocrisy of subjectivism most of us suffer from in stark daylight: many of us will forgive ourselves for flawed driving while we deeply resent it in others. And if we are on bike or foot we will look at driving behaviour in a different way than if we are the person doing the driving. And we may hold open a door for a frail person, but if we are stuck behind that frail person on a country lane we might suddenly not have much patience with them. Such things!

Altogether it was useful. And I'll be more focussed on my speed from now on! Exactly what the course was trying to achieve. I hope this will be my only brush with traffic enforcement ever! 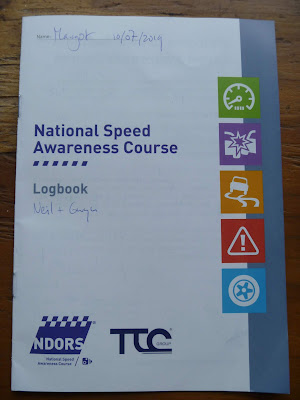