Visit by sister: part I

My sister would come an entire week! I hoped the weather would be good. The last time she visited in the middle of a heatwave. And that was sub-ideal! It was too hot for long walks, and it was too hot to sleep comfortable. But this time could be different!

She arrived on the Sunday, after the hectic day I had had buying a car. But it meant I could pick her up from the railway station! I took her home and showed her the house. It looked decidedly different than the previous time! And we would be more comfortable.

I expected she would kick me out into the hills immediately, as she really likes her walks. But that was unfounded! She was up for a walk but not within three minutes of her walking through the front door. We went for a modest walk in the direction of Tregarth. Not spectacular, but sufficient! And I had gone that way in December but everything looked different now. 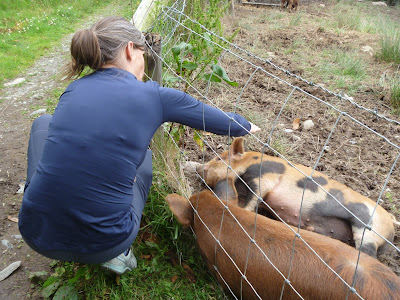 Coming across some charming locals 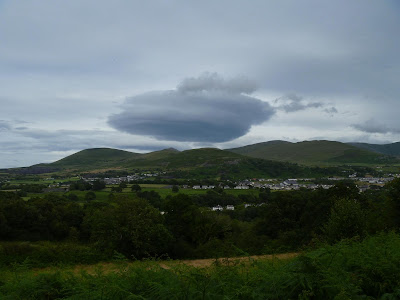 Nice cloud above the hills behind Bethesda


She had offered to cook for the week. One of the reasons was that she was targeting some foodstuffs and avoiding others for reasons of health. And why would I object! She is a better cook than me (not that it is hard) and it's nice to be cooked for. And her dietary requirements suited me fine!

On the Monday we would do a proper hike. I had wanted to walk from home to Aber Falls and back! And she was up for it. We would walk a loop, going near the coast on the way out (where I had walked with Wim and Joke last year, but in the other direction) and on the other side of the ridge on the way back. I had last been at Aber Falls with Roelof, and I had seen the path going up alongside it. Now we could take it!

It was quite a walk to the start of the valley. And it blew a hoolie! As well, we missed a junction (it must have been quite invisible) so we didn't quite walk the way we intended. Afterwards, though, we were glad we had walked the way we had. It was beautiful and not so busy!

Immediately after the falls we found the path up the hill. And it was lovely! We also were entertained by an enormous and beautiful dragonfly that was flying around and dipping its bum into puddles on the path all the time. Was this a female laying eggs? Probably!

Behind the waterfall was a beautiful valley. We needed s spot there to cross the river. Trickier than I had expected! And I managed to drop my water bottle in the river. That was gone forever. Oh dear! But the path was clear. Until the next ford. And the next. Bit not beyond that! We were tired by then but we had to bushwhack for a bit. Uphill. Luckily we fairly soon got to y Gyrn and from there it's a smooth walk back home. We were tired now! But the day after it would be very hot, so we would not want to walk such a distance. It had been some 19 km and that's a lot if too much of it isn't on a path! And there is a fair amount of up and down. 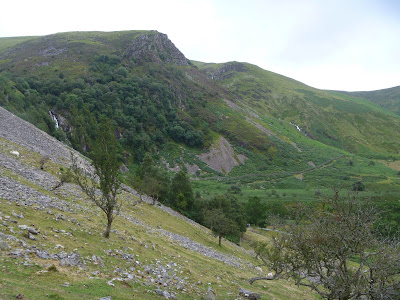 Both water falls seen from the start of the path up 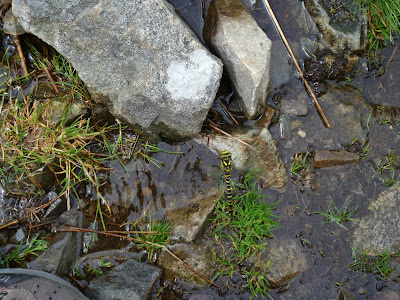 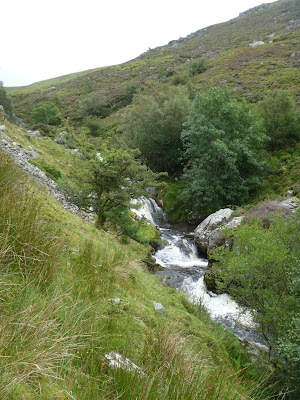 Approach of the waterfall 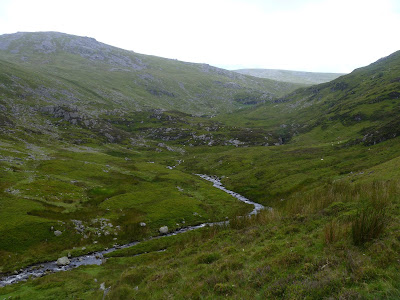 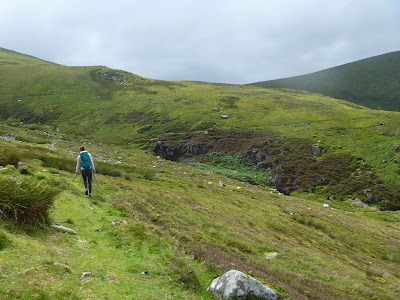 From ford to ford


The day after I started my day early to sneakily do some work-related stuff; this will get its own blog post. I left the house at 5.30, was back at 9.00, and had a nice second breakfast (I had eaten some sarnies during the work). It wasn't a day to do any further extreme things as far as I was concerned! But a nice walk is always good so we picked something modest but pretty. We went to a parking lot a bit north of Beddgelert, to walk to Cwm Pennant (where I had been with Monique) through the woods. We didn't get very deep down as it was too hot! And we still had Aber Falls in our legs. 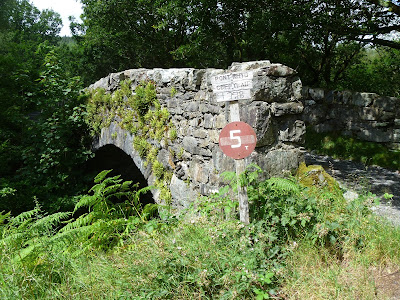 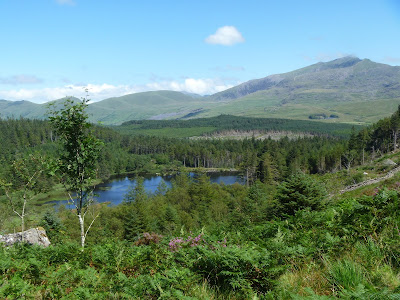 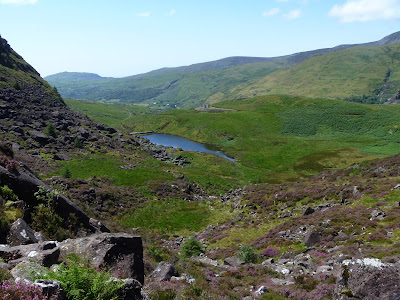 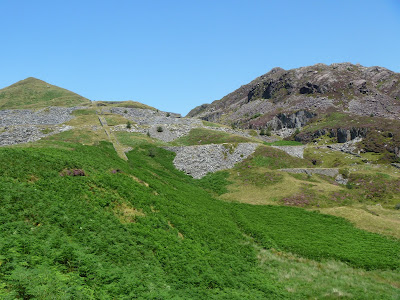 Looking up in the direction of Rhyd Ddu

When we got home we had about a third of the visit behind us! It felt so fast. I am generally a difficult growling loner who can't stand people in her territory, but Marieke is different. We always have something to talk about, we manage things constructively, and we let each other do our thing. For instance, she inexplicably has no urgent urges to sit in comfortable chairs. Really strange! I certainly do. But then I just go and sit in a comfortable chair myself. And that's OK!
Posted by Margot at 09:09