I don't have a need for speed. My car is sluggish and that's fine! But there are situations in which the old thing can still go faster than is allowed. And one other thing it doesn't do very well, like accelerating, is showing its speed. It has a digital display and it's not very bright. If it's bright outside it's hard to read. If I wear sunglasses, and I pretty much always do when it's bright, I often can't see it. So if I drive around I have to lift the sunglasses from time to time to see how fast I'm going. But you don't want to do that too often! And so it happens I was once driving out of Menai Bridge on a bright day and had no idea how fast I was going. It didn't seem overly fast and I was driving the same speed as all the cars in front of me. But that doesn't prove anything of course! A lorry driver flashed at me and before I could process what he was trying to tell me I was already lasered by a cop in a lay-by. Oh dear! I was probably going too fast.

When I came back from the Madog trip I saw an envelope on the doormat. Just as I expected! And it said I had been driving 37 in a 30 zone. Oh dear. I don't know what's next; normally you get offered a driving awareness course but I'm not sure if they do that with people with foreign driving licenses. We'll see! I suppose it was bound to happen one day. I think going 10 years without speeding fines is not bad. But it should have been more than 10 years. I'll have to do the lifting-my-sunglasses more often! 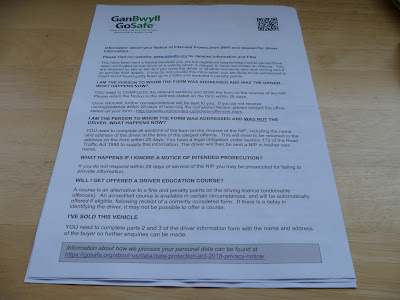