Back to Seler Ddu

Two years ago Jason had showed us his 'pet' mine Seler Ddu. And as it had been only a few of us then we decided to go back. I drove to Clynnog Fawr where I met the other northerners (Jason travels in from the south). We left my car and Edwyn's cars behind and drove up the little country road where we met Jason. We kitted up (as much as necessary; the mine does not require much kit, and it was a warm evening) and walked up. It is a bit of a slog up the hill! But the views are lovely.

We got to the flooded bit Jason and I had explored the previous time first. Then we went to the 'main' entrance. And we had a scamper around! Ed and Edwyn had not been before. So we had a good scurry around. It's a nice place with arched hand-picked levels and funny lithology. It's a manganese mine and you can see the black, crumbly vain in many places. And we even had a look in a level Jason had never explored as it had always been too wet! Now it wasn't. 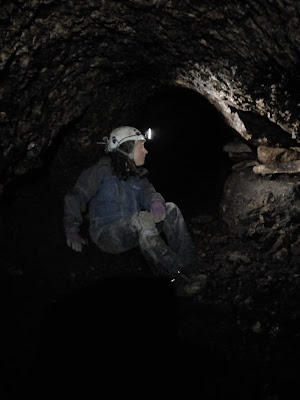 Looking at some funny country rock supports. Pic by Jason 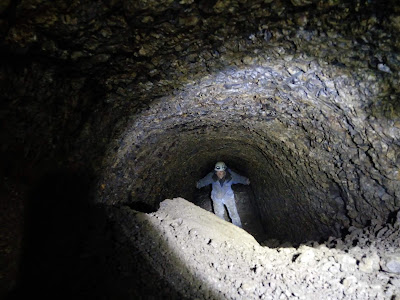 In the otherwise wet level. Pic by Jason 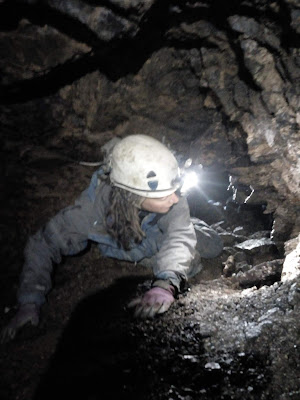 A crawl. Pic by Jason 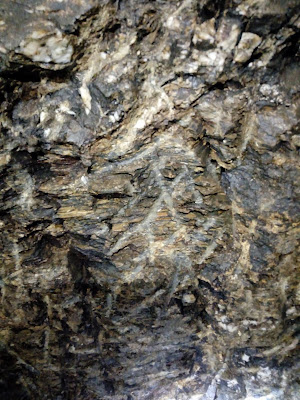 In the otherwise wet level the pick-axe marks were all over the place. Generally they all go in roughly the same direction but not here!  Pic by Jason 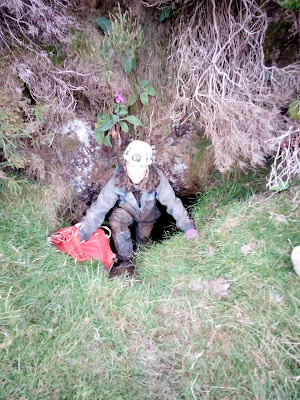 Coming out. Pic by Jason

We then came out and walked along the hill. We popped into another level with a waterfall in it. And then we looked at a drainage level. We had brought a spade and a pick-axe to see if we could improve the draining. David, Edwyn and Jason had a bit of a prod but decided it wasn't going to yield much. We gave up and went back to the cars!

This had been the last regular ThursdayNighter trip for Ed. Lots of hugs followed! We hope we'll see him again. And we hope he manages to have lots of underground fun in the south!
Posted by Margot at 09:24