I had been to a winter graduation once. If you're either on a research contract, or these ad hoc contracts of only a term or so. you don't tend to feel involved enough to go to events like these. But I'm permanent now, and the students who graduate now have been taught by me from the very beginning. So I intend to attend them all! It's nice to see them all robed up and smiling. And I imagine it's nice for them to see lots of their staff to make the effort to be there.

I was early robing up. I got a different robe than last time! I suppose it doesn't matter what they give me. I read some articles until the others arrived and we got into formation. I was glad my robe wasn't overly warm as it was a blazing day! I also had made sure I wore a strappy dress underneath. As little as respectfully possible! And I felt for the men in their suits. 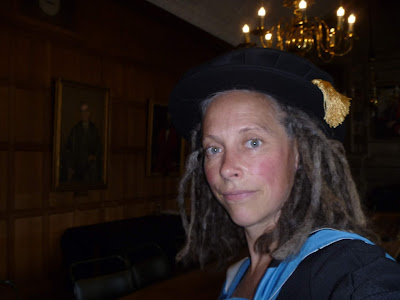 The gown of the day 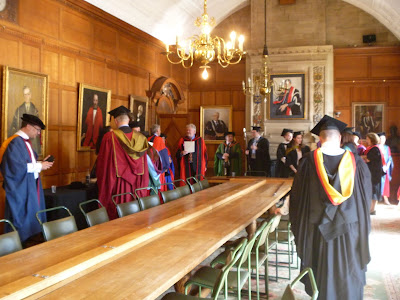 Gathering in the Council chamber

We got ready and walked in. I ended up on the front row, close to, but generally unobstructed by, the vice-chancellor. And the whole thing is televised. Oh dear! I would have to be at my best behaviour. No picking my nose or yawning or looking bored or any of that! But it's not too difficult; I get carried away by the excitement of the students who parade past to be congratulated by vice-chancellor and chancellor.

At then end there were some special honours handed out. One was for the lady who runs the Sea Zoo here on Anglesey and who did her MSc at the School of Ocean Sciences; she won 'alumnus of the year'. Luckily no posthumous degrees or honours this time! The ceremony lasted some hour and a half. Enough time for everybody in a gown (that's both students and staff!) to get way too hot. It started to smell a bit of overheating people. Oh dear! And then we paraded out. Then the students came out and we could congratulate our own students. Nice! But it was hot outside too, of course. We decided to ditch our gowns and go for a drink. And so we did. 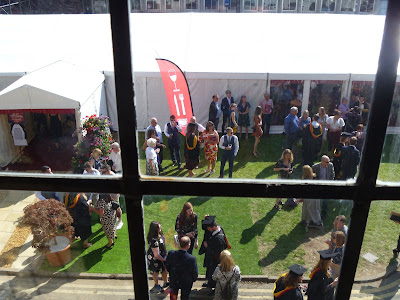 Merriment in the courtyard

There was more merriment there. And I was introduced to the family of one of our former master students. His wife was doing a PhD here so the whole family was in North Wales, even though they were all Tanzanian. And they had given their youngest daughter, who was born here, a Welsh name! That was sweet. And other students spoke of their new jobs or ongoing education.

I hope all new graduates will look back on their time in Bangor, and on this day, with satisfaction! And that many may follow...