I was keen on experimenting a bit with my bread machine! I am still very happy with my normal bread but it was fun to try a banana loaf and a chocolate loaf (I might have forgot to blog about the latter). Now it was time for something savoury! I like olive bread. And garlic bread. And I don't think there is a specific reason not to do both. So I made a garlic-black olive loaf! And I may have overdone it a bit. I was hoping for a bit of a focaccia-like salt crispiness as well so in addition to normal salt I added some bigger salt crystals, hoping they wouldn't dissolve. And I threw in almost a whole package of olives. (rather salty ones, actually). And four cloves of garlic.

So what's the verdict? It came out quite dark, even though I had used white flour! The black olives had been so bashed they had coloured the whole loaf dark. And it was a bit strong! The salt actually had dissolved. So the coarser crystal trick hadn't worked. But it surely was strong enough! If you buy olive bread it often is not quite olive-y enough. But this loaf doesn't have that problem! It maybe even a bit too strong. The first slice is fine but as the loaf progresses it becomes a bit much. I think I might want to avoid eating it before my upcoming personal development review. I think people will be able to smell the garlic from a distance if I have a slice. So will I do it again? Absolutely! But I'll forget about the salt crystals. And try green olives, just to see what that's like. Maybe put them in after the first kneading to reduce the olive-smashing (this was recommended by the machine instructions). And tone it down on the garlic. And use wholemeal flour, at least partly. But one learns! And I sure will enjoy this attempt. I think I'll just drink even more than normal! 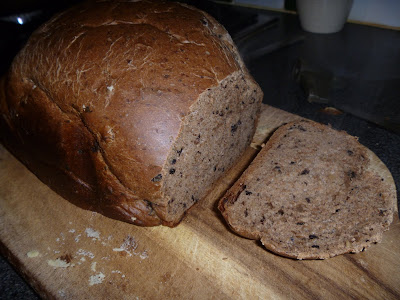