Start tackling yet another raised bed

I have already planted four raised beds. And one mostly. But there is more! I sometimes go and rip out brambles or goose grass as I don't like them. And that way I had emptied big parts of the raised bed against the back wall. I had emptied many buckets of soil from the pile there so I had given it more attention than normal! And then I also pulled out some other obvious weeds. And now the garden waste bin is full, but the bed is starting to look a lot tidier. And I also found out it is actually two separate beds. This one, and the one in the corner with the apple tree in. Hm! That wasn't clear anymore. I'll have to think about whether I emphasise that again, or give in to the realities that they have grown together.

The bed now mainly has one big shrub in it, and then some other nondescript scrubby things, and then some more weed I didn't have space for in the bin, and some things that may be weeds but they are pretty so they can stay. I'll have to find some nice extra shrubs in the garden centre who don't need too much direct sunlight to fill up the space! This garden is starting to look civilised... 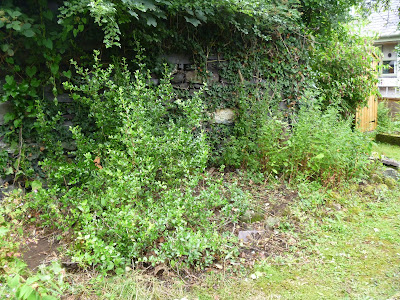 The big shrub in the otherwise largely emptied raised bed