More adaptations to the office

It's great to get a lot of knowledge in paper form! But paper takes space. And when I was offered THE foraminifera encyclopaedia I didn't have enough of that. It takes some 11 m of shelf space! Who has that lying around in the office? Not me. But I had free wall space, and a space downstairs had been stripped of its furniture as it was going to be re-purposed. And it had shelving! Now it was mine. At least, the wall strips and brackets. The shelves themselves had to fit the space I had! And my house had had some shelving in the landing. I had taken that down; these wall strips are not quite the look I had in mind. But I am the kind of person who thinks things may come in handy one day, so I hadn't thrown them away. Good! Now they DID came in handy.

When the second Open Day was over I went to my office. Another session of Saturday office DIY! I (again) wanted to do the wall-drilling in the weekend. And now I was here anyway! A great time therefore to make noise and get this job largely done. I put the three strips I had pilfered from the space downstairs on a wide wall. And the strips from home on the narrow one, next to the door. I noticed there were some drill holes there already! And they fit the strips! That was easy. Although they were in a funny place and in order to make it make sense I would have to put a third strip in. But I assume the system is still in wide use so that shouldn't be too difficult. And then I need to buy some extra brackets, and source some planks. and then I have a lot of space! I have quite some empty space on shelves already; altogether it should soon add up to 11 m! 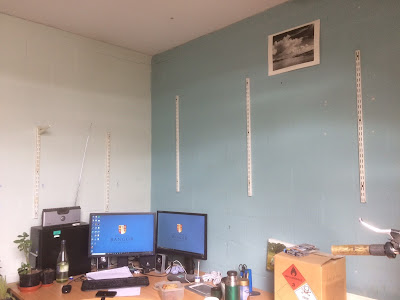