The first part of the week had been good! One epic hike, a slow day, and a partial day. On Wednesday we would do the BIG walk! It wouldn't be as long as the walk to Aber Falls but it was expected to feel that long at least. We wanted to go to Pen-y-Pass and walk back. And there is such a thing as the Snowdon Sherpa: a bus service especially for that sort of thing. We wanted to take that so we set an alarm. We were atypically ready by 8AM! Only to realise the bus only goes on Sunday. Oh dear. But we phoned a cab and he brought us after all, about five minutes after calling him. So by 9AM we started from Pen-y-Pass! And of ours the place was packed but hardly anyone goes up to the Glyders rather than Snowdon. We had the slope to ourselves!

We started out with nice views. But we had on purpose picked a cloudy day for this hike, as we did not want to boil, or burn to a crisp. So along the way we caught up with the clouds! A pity but it was nice and cool. And the path seemed to disappear. If it's still there we lost it. But after what felt like an eternity we reached the ridge! Time to sit down and have some lunch. And figure out where we were. 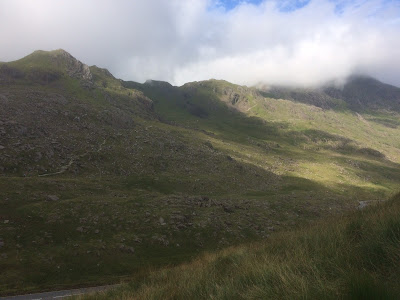 The Pyg Track seen from the start of our walk 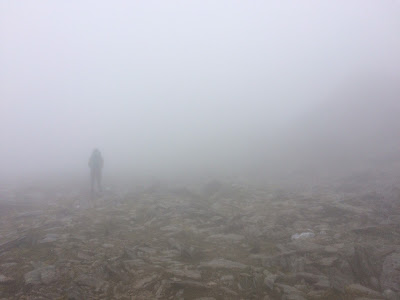 
We knew we were on the ridge but where? We had missed the path and we couldn't check with any landmarks in the fog. But we knew we were on the ridge, so I figured we should walk north until we hit the cliff and then walk west and later a bit north. That way we would go in the right direction! But then I also wondered if my app 'footpath' knew where I was. And it did! We were slap bang on Glyder Fawr. And it told us exactly where the path to Llyn y Cwn was. Handy!

Soon we were on the steep rocky descent to the lake. It's not easy going! But we could see the lake. And after the lake we sat down for some more food while letting some other walkers go past. Then we went up y Garn, and walked the easy terrain after it until Foel Goch. Then we had to get down and up again to Mynydd Perfedd. By then we were sort of done with all the up and down! But we still had to get to Carnedd y Filiast and then down. Especially the latter would be tricky! The path is very narrow and easy to lose. 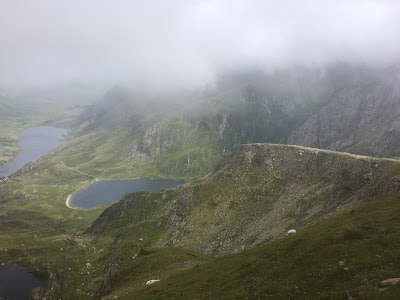 The ridge down y Garn 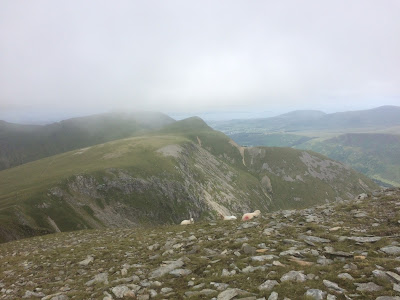 The smoother terrain after y Garn 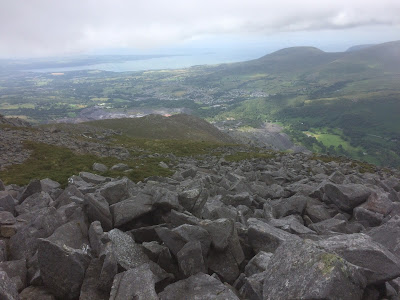 It was a bit trying to get off the ridge. But we did it! And then we only had to walk home over my running route. We even went past the supermarket. And were home by seven! A long day. Luckily we had left-overs in the fridge and we did not have to cook. And we were in bed on time!


The day after we were very stiff in the legs. And it was another scorcher. So we didn't do much! Marieke wanted to go into Betws y Coed to buy souvenirs for the people back home, and she didn't mind me not joining but sitting in the shade on the riverbank instead. And then we did a small walk in the Gwydyr forest. It was so hot that when we walked past a gated mine entrance we both couldn't resist crouching in it and enjoying the cold air blowing past! And the rest of the trip was most notable for the fact we found more chanterelles than we could fit inside our lunch boxes. Nice! Good to have a mushrooming sister. 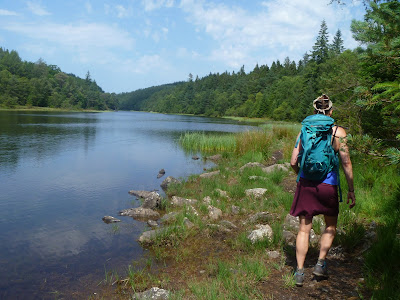 The day after the weather would be OK again and our legs would have rested. So we could be back at it!
Posted by Margot at 09:25