It was time to show my house to my Finnish sister! I noticed I was a lot more excited about that than I had ever been about showing off one of my rented places. Seeing her is always exciting! But I was a bit apprehensive about her appearing in the middle of a heat wave. She might live in Finland but she voluntarily goes on holiday in places scarily close to the Equator. I remember countless events in our youth when either I was comfortable and she was turning blue, or she was comfortable and I was impersonating a steaming rag. How would this pan out?

She appeared on the train, right on time, and I took her to Bethesda. I had turned the office into a second bedroom through the clever addition of a bed. She was keen to see the house in person.

Whatever time she has had to get up or whatever the temperature is, though, she tends to want to go for a walk. And it's beautiful here! So on the first day we went on a modest walk from the front door. We didn't quite end up where I had in mind but it was nice! And it was actually OK we didn't quite do what I had intended as that was further, and we had to still make dinner and Marieke wasn't quite out of her Finnish time zone yet.

The next day was a bit awkward; I had hoped to spend the day with her, but with the Open Day in peril I felt obliged to be there. We had lots of ad hoc Peer Guides and I was their point of contact. So I left her to have a lie-in, and to later have a walk with Marjan. Jaco had to be at the Open Day too!

After the Open Day I went to Jaco and Marjan's place, where Marieke was already awaiting. We would have a BBQ in the garden! Their son was coming too, and Jaco's volunteer student from Brazil. It was nice! But Marieke had mentioned her bedroom was too hot (even a house with very thick walls will succumb) and hadn't slept too well, which had left her a bit worse for wear, so we didn't linger. And when I got home I dug out my standing fan. That thing hasn't had anything to do for years! But I managed to assemble it and it did the job.

The next day we could have a proper day walking, but it was, as every day, very hot, so we decided to walk in a forested area. We went to Betws-y-Coed so Marieke could look in the outdoor shops for some more heatwave-compatible outdoor clothes, and then we went looking for Llyn Elsi. And we found it! It was a nice walk. But by the time we got back we were hot and tired so we made sure to cook something really quick. 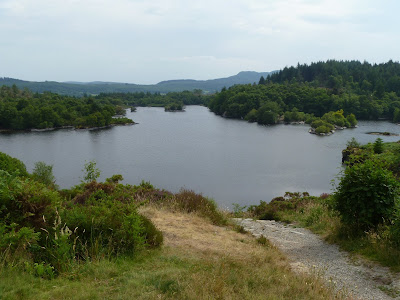 The day after we dared venture into the sun. We went up y Drosgl, and went down via Gyrn Wigau. It was beautiful but again we ended up cooked! It would be a bit of a trend. But after coming home we could just hide in the kitchen, drink cold drinks and discuss the state of the world. I found things both encouraging and dispiriting. The encouraging thing was that I could tell we're both getting older and wiser. I can remember the time when the standard answer to a disagreement was an argument. Now we are open to each others' views. And we express what we want, we take into consideration what the other one wants, and we express our appreciation if the other one does something we find particularly kind. It's great to see that! No chance of that 30 years ago. But then again, that's what's life's about I suppose. If you're not learning from it you're missing a trick! 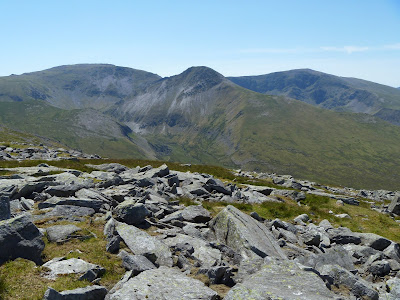 The dispiriting aspect was that we spoke a lot about society. And I had to explain to her what a mess the government is making of Brexit, how awful even the formalities are getting, what happened to Carillion, what fuel poverty is, the difference between the minimum wage and living wage, and more of such things. None of that would happen in Finland! I never lived there, but I am sure Finland is more like Norway than like the UK. And indeed, I can't imagine anything like that in Norway either. I may have got a bit numbed to everything that's wrong with UK society! And seeing things from her fresh perspective made me feel freshly angry again.

It was also fun to see how similar we still can be after not having lived in the same country for more than half our lives! We very often said the same things at the same times. And she also has a device for putting reading material on display in the bathroom, for reading during things such as brushing teeth!

We also did some gardening. Marieke attacked the raised bed with fruit; it had a bit too many varieties. I was aware of red currants (all eaten by the birds) and raspberries and gooseberries, but these were being threatened by brambles. When she started eradicating these she found out there's a fourth type of berry there! I in the meantime attacked the rest of the ash tree on the river bank. And I started to take it apart into garden waste and firewood. 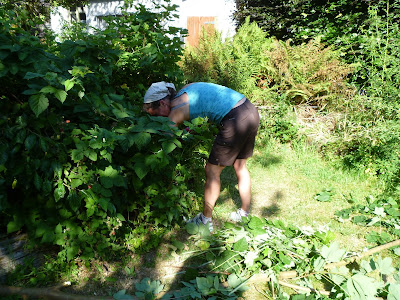 Dealing with the fruit raised bed

On Tuesday we did another walk, again in shady terrain. We headed for Blaen Nantmor as it is a lovely and wooded valley. We did a bit of an erratic walk (my map reading again) but it was nice! On the way home we came past the fire brigade being busy on the outskirts of town. And we came home to worried messages from friends who had seen news updates about bits of Bethesda being evacuated because of fire. Oh dear! 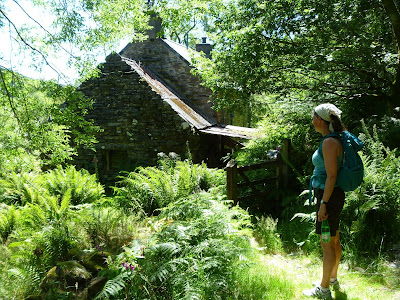 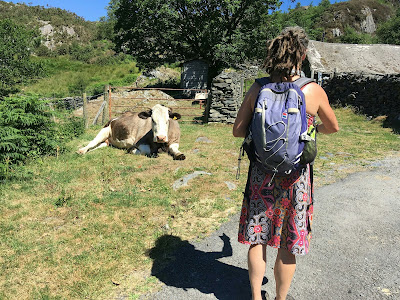 I was there too! And a cow. Pic by Marieke

On the last full day we went back into the sun. We went up y Braich, to Pen yr Helgi Du, and had lunch on the top. It's a long slog up but the view from the top is great! After lunch we went a small way in the direction of Carnedd Llewelyn, but fairly soon went back down, via Ffynnon Llugwy Reservoir. I had a small swim in there! It wasn't cold enough to be fully refreshing but it was nice nonetheless. And again we came home cooked! And I had sore feet and now a sore shin too. Oh dear! 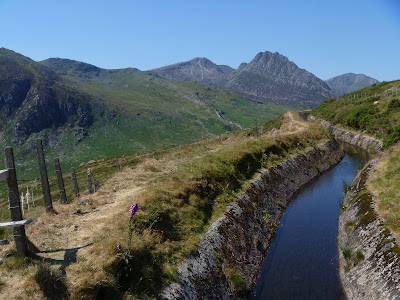 On the way to Pen yr Helgi Du we crossed the leat. Notice Tryfan in the distance

The last day, Marieke didn't need to have a train until the early afternoon, so we did a last small walk. We just went up the west side of Nant Ffrancon. It was an unusually cloudy day! But we didn't go far as my shin was now hurting really bad. Shin splint? I hope not!

When we got home, the electrician had started. There were two of them. They had pulled up the floorboards in the living room, landing, and second bedroom. It looked more like a building site than ever! But I couldn't think too much about that. It was time to bring Marieke to the railway station! And thus came to an end a lovely visit! The heat made it a bit trying but I think we coped alright. And where next? I still haven't seen her new house! But she quite likes walking in Wales (in case that wasn't evident) so we tend to end up meeting here. And landscape matters but it's not the most important thing. We can sister around anywhere...
Posted by Margot at 07:43