When I bought the house, lots of people were curious! I barely lived there or my eldest sister came to visit. And only a few months later, my other sister made an appearance. And then later that same month, my father and his wife would show up. Lots of visitors! But good.

My dad, however, had got me a bit worried. He had boldly booked ten days! Ten! That's so much. I really can't have guests for ten days. I would go completely crazy. And it seems to not just be me; lots of friends reassured me that they would not cope either. So I told him that if he wanted to stay that long, he had better find a B&B or something like that. Luckily he accepted that! And he found a nice cottage a few minutes away, for a week. The remaining days they would have to sleep at my place anyway. And they had hoped for a several day hike at the end; I had managed to book a bunkhouse in Llanfairfechan for the Saturday night, so that was sorted.

Then they appeared. I was in the office, awaiting news. They would drive from Hull, so they didn't quite know how long the trip would take them. I expected them around three, but I still hadn't heard by five. But then an email came. They had arrived! Time to go home and greet them.

Their cottage was easy to find. It was nice to see them! And the weather was nice, so we could sit outside in the sun for a bit. And we had dinner there. It was all very snug! And after dinner they wanted to see my house. Well that can be arranged! And they were surprised it was so close. They had already been there; my dad had accidentally put my address in the satnav, so they had driven to me rather than their accommodation, and they had then driven from one place to the other. And then it seems far! Cars can't take the little sneaky paths. But we had some drinks and then they went home. It had been a long day!

The next day we would go for a walk. I thought heading for the Ysgolion Duon would be nice. But the weather didn't quite agree. It was so foggy we got quite close but never saw the Ysgolion! And we thought we might want to walk back along the path that's on the map that goes to the other side of Afon Caseg, but there was no sign of it. We walked back mostly the same way! And later the weather became lovely. Typical. 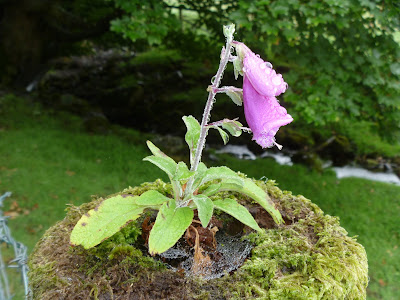 On Sunday they came to help me with the house. But the weather was great, so for 'house' read 'garden'. That was great! Wim cut down a tree, Joke started a quest against knotweed, they cleared the entire riverbank of brambles and stinging nettles, and created a compost heap. So much work was done! And the neighbour lent me his ladders again, so I could make it easier for the others to climb up and down. And in the evening we went out for dinner. We tried the Llangollen, but its kitchen was undergoing maintenance, so we ended up in the local Indian restaurant. 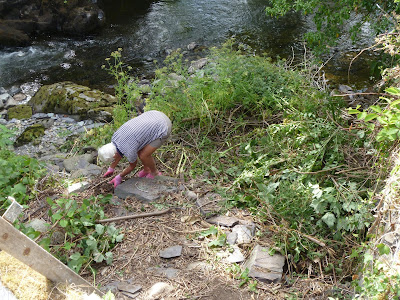 Joke working on the riverbank

On Monday I went back to work. But I took the Tuesday off. I could! And I don't have visitors that often. And we went for another walk. The idea was to go and see if that path we couldn't find on the southern end was findable on its northern end. It was damp again! It was foggy and rainy and we found the beginning of the path. It did peter out, though. We went and followed it to Afon Caseg, but didn't see a way on. We went back! Fortunately it stopped raining. And then we walked back to the sheepfolds I had passed with my sister, and onwards (without muddy mishaps), and home. It had been a long enough walk! I popped by the shops and later joined them for wine and dinner. 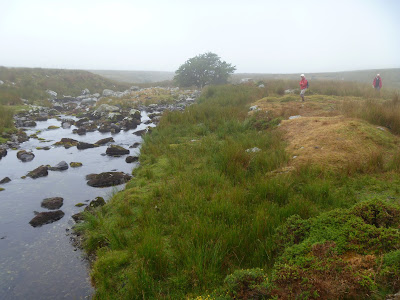 At Afon Caseg in the rain 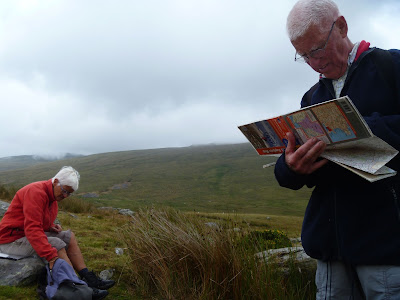 On Wednesday I had to be on call to provide feedback for Supplementary Assessment Week. I also had two meetings and my usual Welsh, so I didn't see my guests. And on Thursday I went underground after work so I again didn't see them. And on Friday I worked too; it was the end of the Supplementary Assessment Week so all work should be submitted. I had a student who first struggled to submit (there was an issue with the website) but then decided he would rather submit late. Oh dear! That must mean he thought he did a worse-than-40% job. But once that was sorted I went home. And found Wim and Joke in my house! Their tenancy of the cottage had ended. Now they were my guests!

The next morning we would all go to Conwy, to start our two day hike back to Bethesda. So when I came home I wanted to have a glass of wine and some nice dinner (as usual cooked by Joke), but I also had to pack my bag and water the plants, and wanted to phone my mum. But I got it all done!

The next morning we got ready and left. We drove in their car to the outskirts of Conwy, and parked the car along the road. We were off! It was a bit steep to get to the North Wales Path we were aiming for, but once we were on it, the going got easier. The weather was a bit on the edge; T-shirt weather and rain coat weather swapped places at alarming speed. But the landscape was beautiful! After not too much time we crossed Bwlch Sychnant. Walking up on the other side was pretty too. And the weather got a bit windy but it was sunny. 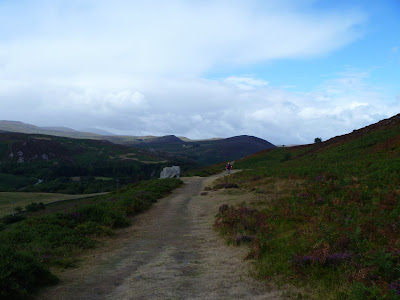 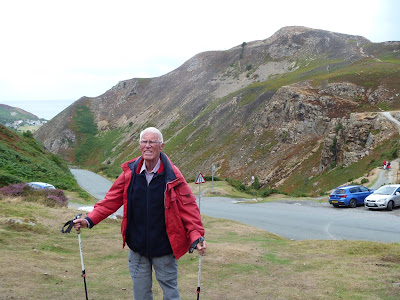 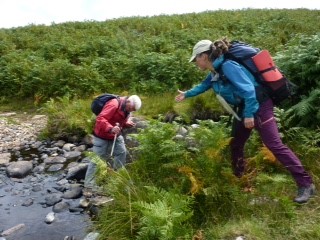 I was there too! Helping my father cross a stream. Pic by Joke 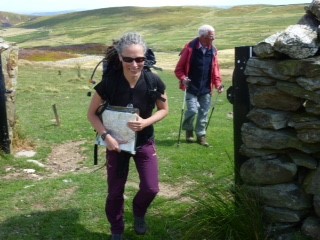 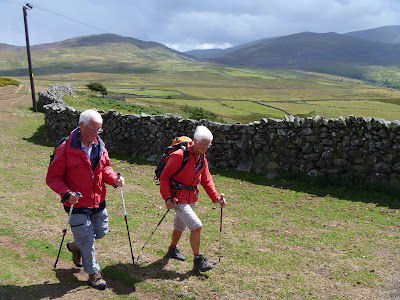 Below Penmaenmawr Quarries
We approached Llanfairfechan and there the map reading became difficult. We walked into one of those fields with more than man-high ferns and I lost overview. We walked into the village at a funny angle. And then it started bucketing down! Oh dear. But soon we were there, and the bunkhouse man welcomed us. He let us into the accommodation. We were the only guests! It was quite nice. We pondered if we should go and buy a bottle of wine in the nearby shop. We decided against! We changed out of our wet stuff and went to the pub for a pub meal instead. 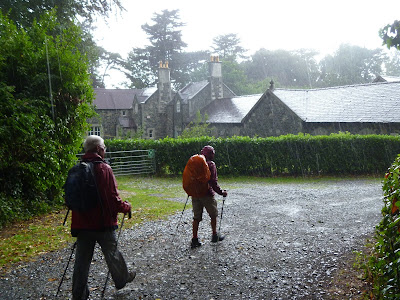 Not so sunny anymore upon reaching the bunkhouse!

The next morning it was raining when we left. That was forecast! But the weather got better in the course of the morning. We walked along the coast to Abergwyngregyn. There we headed inland. Time to pick up the North Wales Path again! That was slightly impeded by a rather large tree lying on the path but otherwise all was well. We had lunch under a tree. On the Wales Coast Path 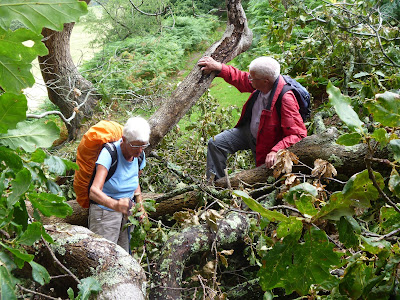 How to get past this tree? 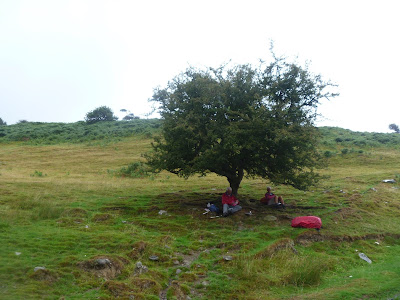 After lunch we walked on. The wind picked up! And we were entirely unsheltered in the barren hills. And then the rain came back too. It was a bit bleak! And we were in the general area of my first Snowdonia walk. We also had a mishap with Joke just stomping along and not realising we had to take a left turn. That her hearing aid wasn't working didn't help. She was a little dot in the distance by the time she realised we weren't following! But she walked back at the same speed she had walked away with so we could fairly soon go in the right direction.

We didn't take any breaks anymore. It wouldn't have been comfortable! We just plodded on. It was pretty but the others couldn't enjoy it anymore. And with this breakless march my dad was starting to show signs of wear. He was really glad to see the Penrhyn Quarry appear out of the mist again! 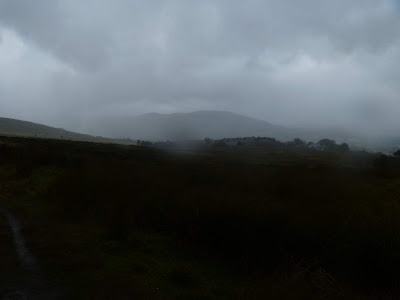 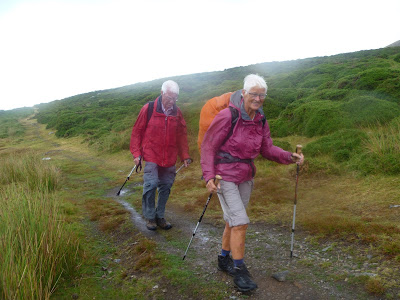 Keeping the spiit up in the wind and the rain

Once home we changed into dry clothes again, and had a nice cup of tea. That was better! But I was aware of the things I needed to do before the weekend was over. I unpacked my bags, darned my sock, made lunch for the next day, and thought I'd place the freezer (which I had sold and which would be picked up on Tuesday) somewhere from which I could easily get to out of the door. Wim had got started trying to fix my back door. You had to tug heavily on it to lock it!

When I had a look at the freezer I realised I had boxed it in. My wardrobe was in the way! And that's a big thing. Oh dear. I dragged Wim away from the door. We had to sort this! It would be quite difficult on my own. Together we dragged the thing into the kitchen, and got everything else that was in the way too (lots of boxes; mainly with books, and a chair, and lots of less substantial stuff), and then the thing could move out of its space under the stairs, and into the little kitchen extension, awaiting pick-up. Success! We put the wardrobe back, and then Wim went back to the door while I restored kitchen and hallway to their normal state. But soon it was bedtime.

The next day was their last day. I went to work again! And after work I climbed. Unfortunately we climbed indoors. It was fun anyway! And I made sure to be home at a reasonable time. That gave me the opportunity to hear what they had got up to, and have a cup of tea (and a swift half of red wine) with them. They had tried to walk a loop through Nant Ffrancon but it had got very foggy and they had got lost. Oh dear! My dad lost! That never happens. And the weather had turned bad. They had been more miserable coming home then than the day before! Oh dear. But they had still managed to do more work on my ceiling beams (they oiled them), pull wallpaper down, and work in the garden. Indefatigable folk they are!

Then we went to bed! The next morning we had breakfast, and then I said bye. Off to work again! And they would just pack and then leave. It had been a good stay! They are good guests, and it was nice to walk with them. But it was also nice to sometimes go off to work and be on my own. I'm still a bit territorial! And now I should go and continue on the house. They now really wonder what it will look like when it's done!
Posted by Margot at 08:15