Another day of double fun

On Thursday I had a climbing course and did an SRT trip afterwards. That was very tiring, but great! And only Sunday I would have a similar, but less tiring day. So much fun! This time I would have a trail run in the morning, and go underground immediately afterwards. David had initially suggested a long trip far away, but I didn't fancy that; because of the race I couldn't get there early, and then it would probably end up being a late night. Not good! And there weren't many other takers either. He then changed his mind to a rather nearby, very short, but fun trip. Perfect! It would only be David, Phil and me; I would start running at 9.20 in the morning, and certainly not finish less than an hour later. David and Phil would gather at the mine at 10.30 and rig it up; two ropes needed to be in place. While they were doing that I would appear and then we would all three do the trip.

But first the race: the Scott Snowdonia 10k. I had picked it as it was a trail race, which I like, and it also covered new terrain. And when the day approached I was glad it was only 10k; I had been a bit under the weather recently, and not run at all. This would be my first run in ten days! Normally I run every second day. I wouldn't have wanted to do a half marathon under such circumstances...

I got up early for the race; they had on the day registration, which closed at 8:30. I wanted to be there with some margin so I would find a parking spot without too much trouble, and make sure I would get my race number. I did. Then I went back to my car and read a bit, and then even had a kip; nothing would happen until 8:45, when there was a safety briefing. I attended that (I could as well have skipped it; they said nothing I needed to hear) and went back to the car again. The 10k wouldn't start until 9:20! And there were only few runners. One of them was also from the School of Ocean Sciences; that was nice.

I had a water bag with tube with me. Within the first 100m, the nozzle came off. Oh dear! I ended up holding the tube closed with my thumb the entire race. Not ideal, but not too cumbersome either. We ran out of Llanberis over a country road, which became a track through beautiful hills, and then a narrow an muddy path through a field. Nice! Then we ran back over the road, but at the nearest pub we vanished into the woods again. I'm not good at the downhill path stuff but it was fun. Then we went back into Llanberis, and out on the other side, up the old miners' track that steeply ascends the hill on the other side. I walked that bit! Had done that before... 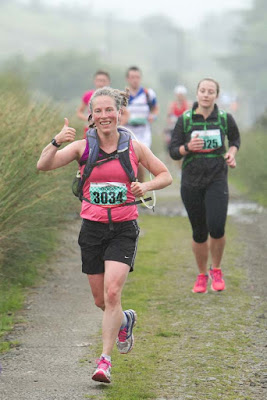 Having fun along the way 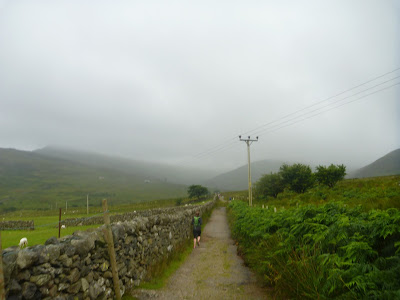 Running into the rainy hills 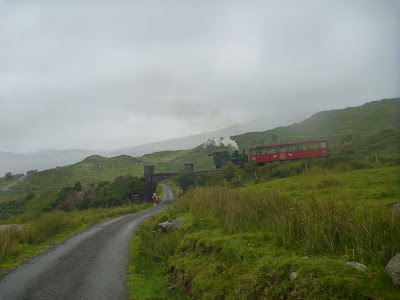 The Snowdon train came trundling past 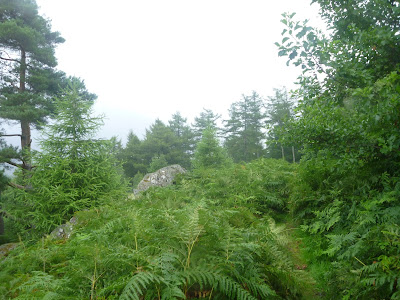 Sometimes the path was rather small 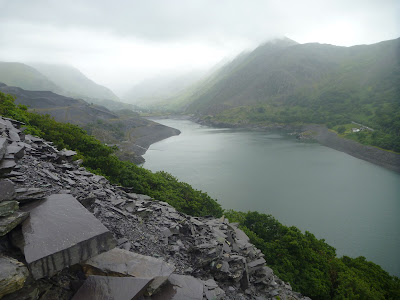 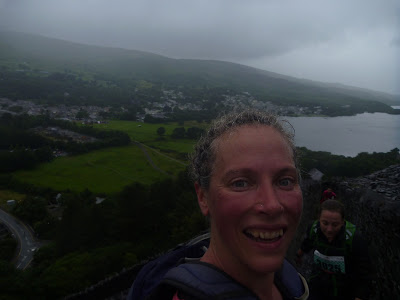 
Down I am not very fast either. I was only at the old hospital or thereabouts when I had already used up an hour! But I ran the very last (flat) bit fairly fast. I finished in 1:11:15. Not too bad. The other SOS-er was already at the finish; I later saw he had been there for 10 minutes already. He had had a good time too! 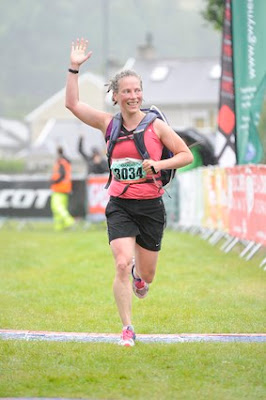 Coming over the finish line

I ate a banana, drank some water, and left. Time to drive west! It was a slow trip; there was a lot of traffic on the roads. But when I got to the parking spot I saw Phil appear and wave at me. Good; I didn't know where the entrance was! I threw off my sweaty race kit and put on my wetsuit. That was stupid; I should have gone for a leak first. Oh dear! Once you're in the wetsuit, caving suit and harness, you are not going to the loo anytime soon. But I walked up. The men had just rigged; David had gone back to the cars to put on his wetsuit. He (and I) needed that as we wanted to explore a not very promising but flooded bit.

I had a cup of coffee with Phil while waiting for David. And another one when David was back; we were not in a hurry! Then we dropped. It was one of those drops when you have to swing out to get to where you need to be; that is always fun. I explored the bit of the mine in the direction we would not go. Then we went the other way. After a tricky drop we were in the part-flooded chamber. After some photography David and I went into the water. And soon we saw it didn't go far, just as we expected; we know now, though. Time to go up!

We didn't use that ladder; it probably wouldn't cope (Pic by David) 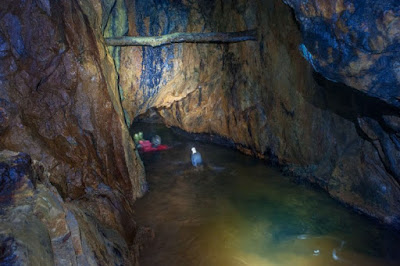 David and I swimming away  (Pic by Phil/David) 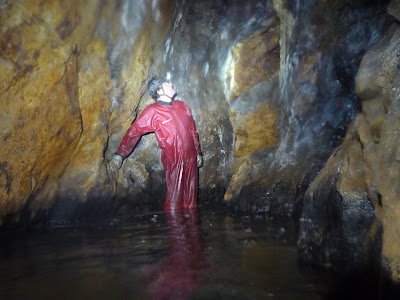 A rather wet David at the end of the flooded, newly explored bit 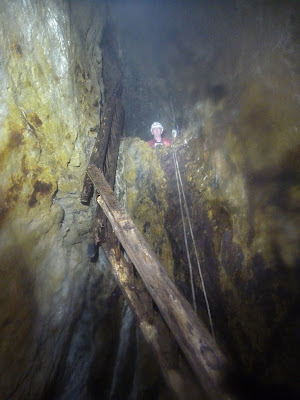 Phil at the top of the outgoing pitch

We got up, explored everything on that level too (including a print of a bare foot; what were people doing there on bare feet??) and then went out. It was only 1:20! Good going. As it was that early, and I was ravenous by now after having had breakfast at ~6:30 and not much food since, I proposed pub lunch. The men agreed! And so a lovely day ended with some catching up with two admirable men over good food. And I realised I smelled like a garbage belt, but nobody asked me to leave. And when I came home I found out I had been the fastest woman (of nine) in my category, in spite of my wonky health. What a day!
Posted by Margot at 09:09