Trips with rope work often take forever. You can only have one person on a rope at a time, and some people aren't very fast. If the trip only goes down it isn't necessarily too bad, but when everybody also has to prusik up things often get awful. This week I was afraid it would be one of these trips where you're not home until 2AM, as there were two chaps around who had come with us before; that had been their first ropework as far as I know, and it took them ages. How wrong I was!

We gathered at the parking lot, and the two aforementioned chaps decided this pitch might be too much for them and they would stay at the surface. That left seven of us.

We rigged the pitch and I went down. It was hard; we were using David's rope and that's thick and stiff, so going down can he harder than up. The next person might take a while too, so I started exploring. I first went down what must have been an adit; as I expected, it was blocked. I then waited for Andy to come down, and went off in the other direction. There was a lot to see! Lots of junctions, funny gullies going up, flooded stopes, crawly bits, and whatnot.

After a while others started appearing, but not all. Jay mentioned Mick and Phil had decided to also stay on the surface; Mick perhaps because of health reasons, and Phil, according to Jay, because he figured the rope was too slow. But my, much faster, rope was there too! I ran back to the shaft and yelled his name. Gone already! Oh dear. But on the way I encountered a cute shrew. That was bonus! I didn't try to catch it; I knew how hard it is, and I didn't know where to safely put it. And this mine is very close to the surface; it has countless many exits that are blocked for humans, but maybe many of these are open to something as small as a shrew.

I went back and continued my explore. David and Rich had gone down some squeezy bit where David throught there were pretty formations. I first scouted out the far end, and then went down to where I thought the two of them were. I found only David! I helped him light up some pics and then went to get Rich, who had not found the way down and had headed back. By then, Andy had started his way back up. 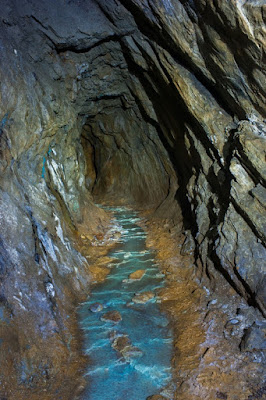 Beautiful subtle blue flowstone on the floor... pic by David

With Rich delivered I went back to the shaft, as I figured I'd seen it all by now, and maybe the rope was free by now. It wasn't, but this meant I could hold the rope for Jay. He heroically started up using only his arms! That's quite a feat. But he was so kind as to haul Andy's heavy bag up and that could not be done on arms alone. I'm still impressed!

When he was up I followed. I was surprised there was no sign of David or Rich. And it was raining; we were waiting somewhat uncomfortably. Then Mick and Phil appeared from their explore. There seemed to be very much to see! Maybe next time. And Phil told me it wasn't the thickness of the rope that had stopped him; just the sheer number of people on the rope. That made me feel better! And by then I heard voices; David and Rich were on their way. And it was till so early! We changed, and had time to go to the pub. We had a swift half and then left. It was still only 21:50! A pleasant surprise!
Posted by Margot at 08:42