Quick climb before the rain starts

I'd climbed for the first time in ages and had had a good time. So when the week after we'd go into Dinorwic (Australia, to be precise) I was keen to join! We'd done the 'sidings' before. Even though I'd just been there after the wedding. In Dinorwic, that is; I wasn't going to lug my bike up to Australia (the various parts of the quarry are named after various geographical locations).

I drove directly to the meeting point and met the others; there were six of us. We packed ropes and walked up. We first went to a level not very high up, and had a look, but the routes looked too difficult. So onward, to the sidings! We know we can do these. 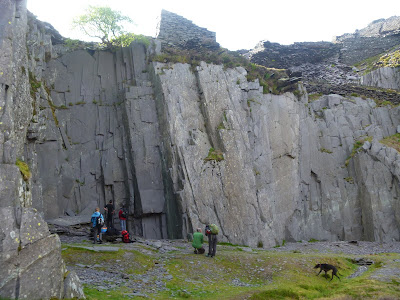 These routes look too hard
(NB that dog is not with us!) 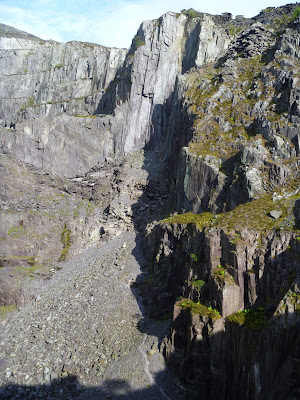 Nice view into one of the pits

At the sidings we had a look. There was one easy route and Eifion was on it like the clappers. I wasn't keen on leading the others but I wondered if they could be rigged from the top. I took a rope and two karabiners up and found that yes, one of the routes could be rigged that way. I thought I'd manage more if I used the clipstick to pull the chains up! But that was optimistic. But Sion brought a rope up the easy route and managed to rig the route next to it. That was three ropes up and only six of us and that was enough. And there were clouds coming in; if I wanted to climb anything I would have to be quick. It's like the last time I was here! Climb quickly and then get chased away by the rain.

There was a rope free; the one I had put there. I started climbing but it rained already. The rock got all slippery! At a scary bit with little to hold on to and a nasty swing if you came off I didn't fancy it anymore. I asked to be lowered. But we still had two routes you couldn't access from the top rigged, so I volunteered to climb the easy route (less easy now) and bring the ropes down. And I did! It was a bit faffy but it worked. And then we packed up. No point staying! 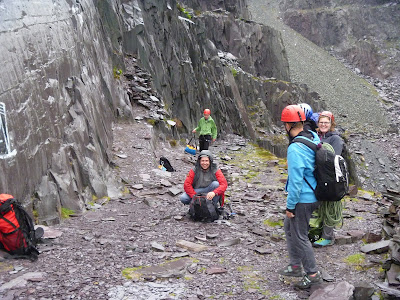 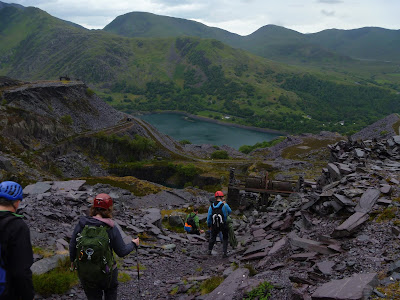 On the way back I dropped a climber off in Rachub; she had come a few times before but it was the first time I saw her. She didn't drive and her mom had dropped her off, but as she lived in Rachub I could easily take her back. She turned out to be a psychology fresher! Interesting.

Maybe one day we'll climb in Dinorwic and it stays dry! That would be lovely!
Posted by Margot at 09:26