When you live right next to something that could be described as a Gwynedd arts centre, if you see a newspaper headline saying 'Major expansion plans revealed for Gwynedd arts centre' your attention is caught. I read the article. It was indeed about Neuadd Ogwen. And it said they wanted to expand - but where to? They can't go to the front; that's where the road is. And on the other three sides are houses (mainly mine!) and gardens and my garage. And such! The newspaper mentioned an event with a presentation of the plans the day after and I intended to go. That day I looked on the Neuadd Ogwen website and found nothing, but I wanted to go and see for myself if anything was happening.

That next day I saw Jenny in the pub as usual. We tend to meet until seven, and the event also began at seven, but I figured I could show up a bit late. We overran a bit (we sometimes get carried away) and I rushed to Bethesda. When I got there the presentation of the plans in the foyer was over but a consultation in the main hall was about to start. I walked in and saw Sue, from my Welsh class. I joined her.

Two presentations showed the history of Neuadd Ogwen and what they did now. And then it was our turn! The audience was separated in to three groups and we were asked to brainstorm about the opportunities for the place, its challenges, and what we as the community could contribute. Sue and I stayed in one of the Welsh groups. At least it was good language training! I wasn't brimming with ideas I must admit but well one tries.

When we were done and someone from NO had summed up I went to have a look at the extension plans. And it started to make sense! I had seen from my garden a roof that really needed some maintenance on the NW side of the hall. It turned out a whole row of sheds and lean-to's were built against that side of the building, but they weren't in use. And now NO had bought the pub next door (the Victoria) with its apartment and bunkhouse, and the buildings seemed to have come with that. And now they wanted to do them up and use them for things like band practice, art studios, and whatnot. Good idea! And I spoke with Dilwyn, the manager, and he said they would insulate the loading doors, which is great, as they let through a lot of noise as is. They get a porch! Good. And that may produce some mess and noise but well, I'll have the garage roof redone and that will do exactly the same. We'll make it work! And I will try to engage a bit more with the events. Although sometimes you just can't! I missed many monthly markets due to Ocean Sciences Open Days and Welsh classes. I hope I'll manage to attend the next one! And by then who knows, maybe the porches are in place! 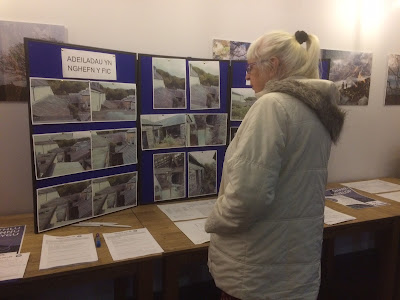 A lady looks at pictures of the derelict lean-to's
Posted by Margot at 09:27