The previous weekend hadn't really brought rest. It had been great to go up a mountain with the Cornish, but I had gone into the week without feeling I was ready for it. And I had kept running! By the time it was Saturday I was tired but still behind. I had lecture to prepare! And lots of paper work to do with the house. So on Saturday I did a quick run in the rain and then got down to business. But I got home at about four in the afternoon, feeling like the worst was over. So I was glad I had suggested to our American guest academic to go for a walk. He had admitted that he sometimes felt a bit alone during the weekends. His family are coming soon, but this weekend he would still be on his own! And there was something in it for me too of course; not only because I like a walk in the mountains, especially in good company, but it would also force me to not sit staring at a screen for a while.

I picked him up from home. We had coffee while looking at the map; I had thought up two different walks, depending on what Jeff felt like. He went for the one onto Mynydd Mawr. Nice! So we set off, and parked at the end of y Fron. Then we walked up past a small slate mine. I figured he should see one from close up! He's in Wales now.

The weather was a bit grey but otherwise OK. Soon we walked onto the path onto the mountain. When we got higher the views went more spectacular and the ground underfoot more frozen. Near the top it started to blow a hoolie. It was hard to take pictures! But the view was worth trying anyway. We decided to continue to the ridge above Drws-y-Coed. Some bits there were quiet, but near where we decided to turn around (above Rhyd Ddu) we were almost blown over. We didn't linger! 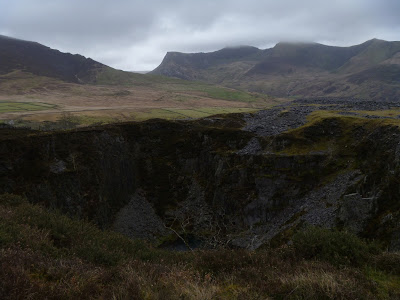 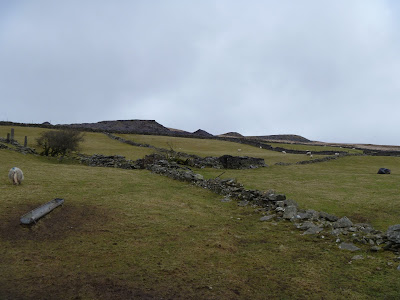 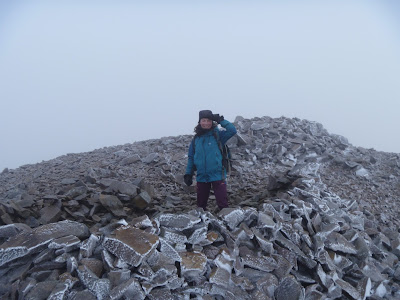 Me on top of Mynydd Mawr 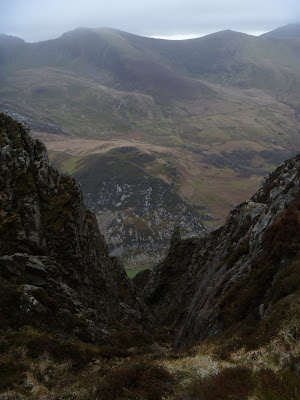 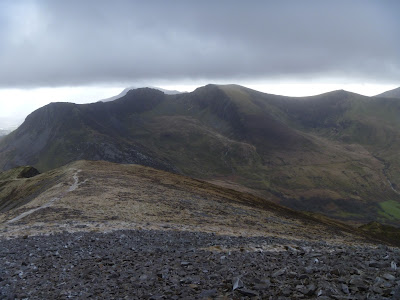 The path towards Rhyd Ddu from the top of Mynydd Mawr 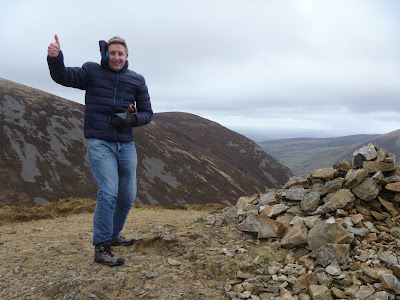 Jeff mananges to not get blown away

We had some coffee and tea at a quiet spot, and then legged it back over the top. Now we were facing the wind! So I had lots of tears in my eyes. But it got easier when we got further down. We had to turn around and sit out one hail storm as the hailstones in our eyes wasn't very nice.

When we got back to the car Jeff suggested going for lunch. I suggested the Anglesey Arms in Caernarfon. They did Sunday roast there! The most British thing we could eat. So we did! It was nice. And being very full I dropped Jeff back home. There was still enough Sunday left to do some chores! And go to bed early. I wanted to start the next week fresher than the last one...
Posted by Margot at 07:45